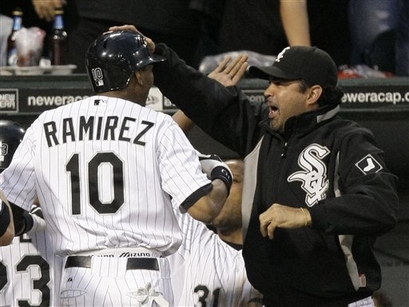 Oh yeah, and for the final playoff spot.

First, it's hard to know who to blame for Detroit's failed attempt at playing spoiler.  Does the Fail Trophy get handed to Armando Galarraga for a pair of wild pitches and allowing the game to be tied up at two?  Or maybe it goes to Bobby Seay for avoiding the strike zone like the British avoid dental care.  There's also 24-year old catcher Dusty Ryan, who allowed three passed balls in that fateful sixth.  But personally, my vote goes to Gary Glover.  With the bases loaded and one out in the bottom of the sixth, with the game tied at two, he offers a juicy Thanksgiving turkey up on a silver platter to Alexei Ramirez.  Ramirez, in turn, immediately deposited the ball into the left field seats.  At 6-2, against the vaunted Tiger offense (1000 runs!), that game was toast.  Mmmm...turkey...and toast...

Now we move onto game 163:  Twins @ White Sox, 6:37pm CST, Tuesday.  Nick Blackburn versus (probably) John Danks.  This is what it was all destined to come down to (apparently), and if this season's play-in game is anything like last year's, baseball fans around the world will be in for a treat.

Twins and White Sox fans will be in for a lot of heartburn.  Keep those TUMS handy.

I think it's entirely possible to look at this game from two vantage points.  One, we're seeing two teams who have barely managed .500 ball over the two-plus months since they met each other in July.  Essentially, we'll be watching two clubs battle it out to see who can back into October with their tails tucked not-as-tightly between their legs.  Two, we're seeing two teams who have to lay it all on the line--this game is IT, it's the penultimate of sporting events, because there's nothing in the world of sports that can beat the intesity of a game where every single thing that happens matters.  Tuesday's game will be an intense, heated, glued-to-your-seat/television/internet connection showdown between two familiar foes.  It's hard to get much better than that, sports fans.

On Thursday, when the winner is in Tampa playing the Rays, this game will still be fresh in our minds.  This is a game the Twins can win, but unlike the three-game sweep last week, this time Minnesota won't be in the comforts of Dome.  They'll be at U.S. Cellular, in front of a riled and unfriendly crowd.  Not to mention the people in the seats.

Tomorrow morning we'll have your preview up and ready, to prepare us for the one-game take-all contest tomorrow night.  I'll see you then, so mentally prepare yourselves tonight.  Leading up to gametime tomorrow, there's going to be a lot of excitement.