Born in 1915, Carl Pohlad is best known for being the owner of the Minnesota Twins for the last 24 years.  He witnessed two World Series championships, six division championships, and the bred a franchise that has become an envy of the baseball world, thanks to their internal successes and fiscal responsibility.  While his legacy as Twins owner is only part of what he will be remembered for as a man, it will certainly be one most definitive examples of a long and prosperous life.

In some circles Mr. Pohlad was known as the "tight" owner, the guy who wouldn't take money out of his own pockets to bail out his ball club.  In reality, the Twins organization was run as a business, with responsibility, dedication and consistency, and it was this business savvy that is not only being paid off in on-field success over the last seven seasons, but it's also one of the reasons that Forbes estimated that Mr. Pohlad was the 102nd richest man in America.

For 24 years, the Twins were the benefactors of Carl Pohlads' love of baseball.  There were dark times and there were great times, but those 24 years represented a microcosm of life.  He leaves behind an extended family, proud of his life, and of course a baseball organization, leaving it in better shape than when he bought it back in 1984.

Our thoughts and prayers are with the Pohlad family. 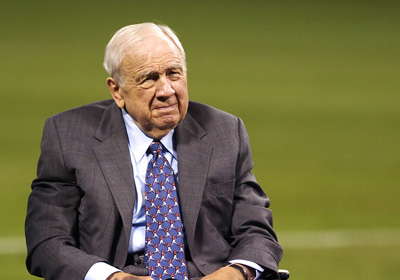