Share All sharing options for: Saying Goodbye to the Metrodome: Top 5 Memories 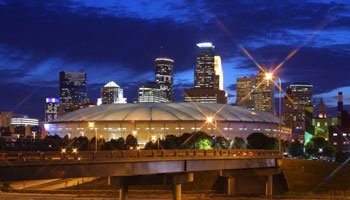 Barring a minor miracle, tomorrow night the Minnesota Twins will open their final series in the Hubert H. Humphrey Metrodome.  28 baseball seasons ago, on April 6 1982, the first baseball game was held as the Twins played host to the Seattle Mariners.  In just a few hours the Kansas City Royals will be baseball's last visitors under teflon skies.

There are a lot of easy memories when you think back.  Of course there's the unbelieveable run by the 1987 Twins, when they returned to Minneapolis down three games to two but still took down the St. Louis Cardinals in seven games; Kirby Puckett, Kent Hrbek, Gary Gaetti, Tom Brunansky and Frank Viola became household names over night while a 36-year old Bert Blyleven threw a now unthinkable 267 innings.  Even more of you might choose the 1991 incarnation of the Twins, starring some of the same characters while also including franchise names like Rick Aguilera, Chili Davis, Brian Harper, Kevin Tapani, Shane Mack, Scott Erickson and Jack Morris; Puckett's homer in game six and ten innings of shutout baseball by Morris in game seven.  Or maybe you were there for the alpha, for a 102-loss team with 22-year olds Herbie and Viola?  How about the completion of one of the greatest comebacks in the history of the organization, when the team won the AL Central title after the final out of their season was recorded in 2006?

I'm too young for some of these, at least to remember them properly.  My top five metrodome memories will all be from games where I was actually there; when I was actually sitting in those horribly placed seats, under a dirty yellow sky.  Check out my top five after the jump, and then feel free to share your own.

This one isn't even baseball.  In high school I was lucky enough to be part of a team that made the state playoffs for football.  Two consecutive seasons I got to play at least one game on the turf of the Dome, the same turf as Puck and Hrbek and Radke, the same turf as Anthony Carter and John Randle and Randall McDaniel, as a member of the Breckenridge Cowboys in November of '95 and '96.

On June 22, 1992, my family made a trip to the Cities for a vacation away from Greater Minnesota, and I saw my first Twins game.  The Angels were in town.  We arrived early enough to watch the guys warm up in the outfield, and I can still remember how in awe of them I was.  They were just a few feet from me, in the flesh--real, live people, not on television.  Kent Hrbek wasn't in the lineup that day, but I still got to see Knobby and Kirby.  Knoblauch singled in the first, stole second base and eventually would score on a Chili Davis single.  In the seventh Brian Harper walked, Pedro Munoz doubled moving him to third, and two batters later Harper scored on a Greg Gagne sac fly to make it 2-0.  That was the final score, the Twins winning my first ever game on the back of those two runs and 8.1 innings of scoreless ball thrown by John Smiley.  Aggy got the save, of course.

I went to a Twins - Blue Jays tilt with my friend Mike on June 22, 2007.  There were four drunk Jays fans in front of us, and honestly I don't even remember what the score was, although I do know the Twins won.  Why?  Because all I can remember is this:

I got goosebumps when I saw Johan Santana pick up his 1000th strikeout on June 13, 2006, as I went to a game to see myself in Dugout Splinters for the very first time and to catch a game with some friends a couple days before my birthday.  But while Johan more than did his job, striking out 13 over eight innings while allowing just five hits, he couldn't hold the Boston Red Sox scoreless.  Jason Varitek's line drive home run to center field put Boston up 1-0, and the Twins would only manage to tie the game on a Michael Cuddyer homer in the bottom half of the inning.  Santana left the game tied, and it wasn't solved until Jason Kubel decided to make Julian Tavarez pay for intentionally walking Torii Hunter to get to him.  With the bases loaded and the count full, Kubel took Tavarez deep for a walk-off grand slam home run.  It.  Was.  Amazing.

On April 5, 2004, Opening Day, I watched as the Twins slowly sunk to a four-run deficit through six innings at the hands of the Cleveland Indians.  Brad Radke struggled early, giving up a second inning homer to Travis Hafner and a third inning homer to Jody Gerut, before settling down for the next couple innings.  He gave up another solo shot to Hafner in the top of the sixth, and there wasn't any life in the Twins' offense, which had managed just one hit (a single by Shannon Stewart to lead off the bottom of the first) off CC Sabathia over seven innings.  But then came the bottom of the eighth.

Joe Mauer walked to lead things off, and Christian Guzman followed that up with a single before the top of the order cylced around and Stewart moved both runners up on a ground out.  Cuddyer followed with a hard liner to center, scoring both runs, and was moved to third base on a Doug Mientkiewicz single.  Corey Koskie was sitting dead red on a 2-2 pitch and drove it into the left-center gap for a ground-rule double, scoring Cuddyer to maker it 4-3, before Hunter singled to tie the game and finish the scoring for the inning.  Jacque Jones and Matt LeCroy struck out to end the rally.

Then all went silent once more. 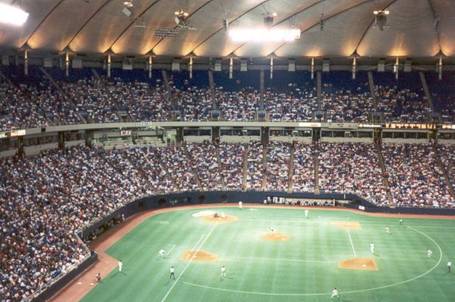 J.C. Romero, Joe Nathan and Juan Rincon combined for three scoreless innings.  Aaron Fultz and Joe Roa had already combined for two of their own, but those three bridge us to the bottom of the 11th.  Jones struck out again, for the fourth time in four at-bats.  LeCroy managed to squeeze out a walk, and was replaced on the bases by Nick Punto.  Mauer pulled a hard shot into right field, allowing Punto to take third on the one out single.  Guzman struck out for the second out of the inning.  Alertly, Mauer took second base on defensive indifference with Stewart now at the dish, giving the Indians the option of intentionally walking Stewart to face Cuddyer.  Chad Durbin and the Indians decided to go after him, and Shannon repaid them by smashing a line drive home run into the left field seats, about four rows in front of where I was sitting.  The crowd went absolutely berserk, and I'm pretty sure Mike and I were already nomiating Stewart for MVP on the back of his strong showing with the Twins in 2003.

This, of course, was also Joe Mauer's very first game with the Minnesota Twins.  I studied him closely before the game started, warming up with Brad Radke in the bullpen.  There appeared nothing unusual, he wasn't wearing bling and he wasn't acting up and he didn't strut.  He just squatted down, held out his glove and let Brad warm up.  From moment one Joe was all business, even when his name was announced (hitting eighth, by the way) and the crowd rained down applause like they already knew he was Baby Joe Jesus.  That in itself almost qualifies as another memory, seperate from the game, that I will always remember.