Joe Nathan's Not Losing His Fastball, Is He?

Share All sharing options for: Joe Nathan's Not Losing His Fastball, Is He?

During last week's great "Joe Nathan: Trade Him?" debate, a friend of mine (who shall remain nameless) made the following point: "His fastball seems to have lost some hop (and not just in the final month of the season)."

Apart from all of the other arguments, this one I had to explore for myself - and thanks to the highly useful PitchFX tool at BrooksBaseball.Net and the PitchFX pages at FanGraphs.com, I had the tools I needed.

Let us deconstruct the above argument, and tackle some possibilities one by one.

First of all, let's be clear: the PitchFX data available only extends back to midway through the 2007 season.  We can't use this to prove whether Nathan has dropped velocity since 2004, when he started closing games for Minnesota.

However, it's probable that he's lost some zip since then; after all, he was 29 back then. He'll be 35 next month. Of course he's not throwing as hard as he once did. Not everybody's Nolan Ryan, and can keep throwing hard until they're 68 years old.

That said, if you wanted to use that argument, then you should have used it two years ago.

Prop #2: Joe Nathan has RECENTLY lost some zip on the fastball.
Veracity: Questionable.

The first is a graph of his averages, for all of the data we have for the past three years: 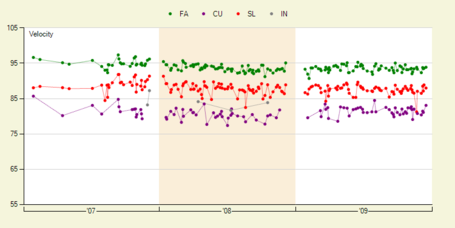 The second shows his velocity ranges for his fastball, in the same time period: 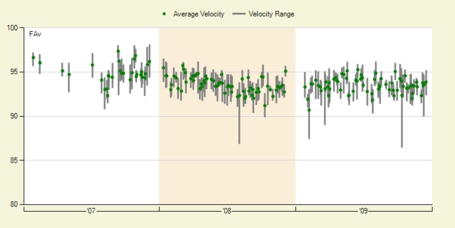 I'm just eyeballing these graphs, so I can't tell you that these prove anything with any statistical certainty.  But 2008 and 2009 look a lot alike, and I have a feeling that if you lined them all up in descending order, there'd be a lot of '08 appearances and '09 appearances intermingled.  If anything, his fastball has been the same for two years.

So let's examine one more possible argument, about September and October this year.

Prop. #3: Joe Nathan lost something off his fastball in September.
Veracity: Doubtful.

I reviewed his average and max fastball speeds for all of his appearances in the regular season in September and October (a stretch in which he saved 12 of 13 games, had a 3.38 ERA, and allowed opponents to hit .158, by the way.)

Ultimately, his fastball was more or less the same for the entire month - right in the 93-94 range consistently, day after day.

I think it's simple to sum up: sure, Nathan is older than he once was. He may not be able to throw as hard as he could at age 29. But over the past two years, he's maintained a remarkably consistent velocity on his fastball, and at 93-94 mph, he still throws plenty hard. I don't think a drop in velocity can be used as an argument for trading him.