In recent seasons we've been accustomed to seeing a Twin or two sitting pretty high in Baseball America's Top 100 Prospect rankings.  Francisco Liriano and Joe Mauer come to mind, but even when Minnesota isn't making appearances at the top of the list they at least get quantity points.  Here's how they stack up in 2009. 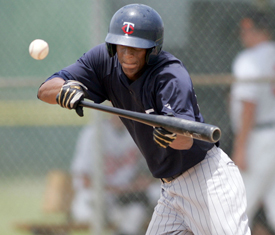 Baseball America estimates Hicks will breach the majors in 2011, which would make him 21 on opening day.  He has the tools, and he raked with the GCL Twins in '08, but it's always easy to be optimistic when you're basing career projections off of one professional minor league season.  Count me in that optimistic camp for the time being, but he's going to have to work on making better contact to keep up those good offensive numbers.  As he progresses and starts to meet better pitchers and better defenses, an 8% lind drive rate isn't going to get the job done. 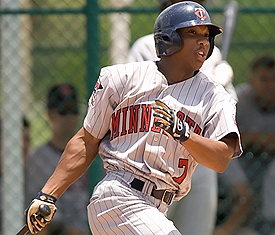 Like Hicks, BA predicts a 2011 major league debut.  He'd turn 23 May of that year.  While Hicks currently projects as a guy who could hit almost anywhere in a batting order, Revere is a top or bottom kind of guy.  His speed and on-base percentage are his most valuable assets, but he's still young and could surprise a bit as he continues to fill out.  His arm strength is what really puts him a notch below Hicks, although he might just be fast enough to catch anything hit near him, in which case he won't be pressed to show off the Shannon Stewart-esque noodle too often. 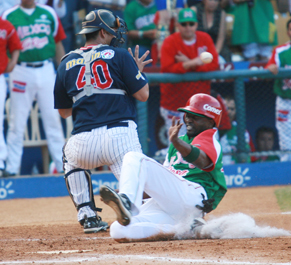 How about that--another 2011 prediction.  Wilson would be just 23 still, but it certainly seems like BA expects a bit of roster turnover in the next three years.  As for Ramos, he has a career line of .288/.344/.435 in three minor league seasons  He's skilled and relatively polished for his age, but he'll be put to the test in New Britain this season.  If he continues to excel at the dish and continues to gun down base runners, 2011 might not be too optimistc of a debut.  But if he stagnates, his life on BA's prospect list may be short-lived.  Hopefully his strength and ability can help off-set his aggression.

That's it, folks.  There are no pitchers on the list, and only three players total.  What does this mean?

There are three options--either the Minnesota farm system isn't as strong going into 2009 as it has been recently, the talent levels throughout the minor leagues are stronger across the board, or Baseball America isn't paying adequate tribute to the talent pool for our Land O Lakes organization.  Or there's option number four, all of the above.

Names like Luke Hughes, Deibinson Romero, Danny Valencia, Deolis Guerra, Anthony Swarzak and Rene Tosoni come to mind, but none of them are necessarily being done a disservice by being left off this list.  They're all good, or have some decent upside, but none of them are slam-dunk shoulda-been-on-the-list names, and that's the bottom line.  In the prospect bell curve this isn't a top-heavy organization, and that's perfectly represented in BA's Top 100.

All thirty MLB teams were represented in the list, with the Astros, Nationals, Padres and Tigers represented just once each.  The Rangers and Athletics held seven spots apiece to lead the pack, while the Marlins held second place with six spots.  The Braves and the Rays tied for second by splitting ten spots between them.