A couple of weeks ago, a British print magazine (Guardian) managed to squeeze a little baseball into its sports (sorry Brits, SPORT) page.  It was cut out and saved for me by a friend of mine, and after taking a few pictures on my phone I'm here to share the wisdom of the British and their interest in what the French might call les gyroball.

That's the actual title of the piece, including the lowercase 'b' in baseball.  Let's take a look at figure 1.1: 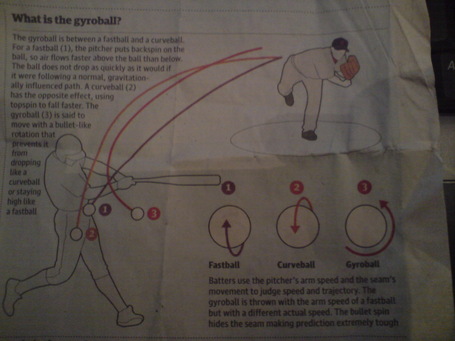 Pretty amazing stuff, isn't it?  I'm not sure if you can tell prior to publishing, but the figure of the pitcher is wearing a Boston Red Sox cap.  We all know why, and it's not just a happy coincidence for Guardian, either.  The sidebar content of the article references Daisuke Matsuzaka, but we'll get to that later.  It'll be fun, promise.

I'm assuming we can all see the diagrams, as well as the paragraph about different spin on fastballs, curveballs and gyroballs.  Here's what the (less clear) top section has to say:

The gyroball is between a fastball and a curveball.  For a fastball (1), the pitcher puts backspin on the ball, so air flows faster above the ball than below.  The ball does not drop as quickly as it would if it were following a normal, gravitationally influenced path.  A curveball (2) has the opposite effect, using topspin to fall faster.  The gyroball (3) is said to move with a bullet-like rotation that prevents it from dropping like a curveball or staying high like a fastball.

What astonishes me, just a little bit, is how accurate that really is.  Either somebody had a whole lot of help and did his or her research, or the author is a real baseball fan.  From that paragraph, it's hard to tell. 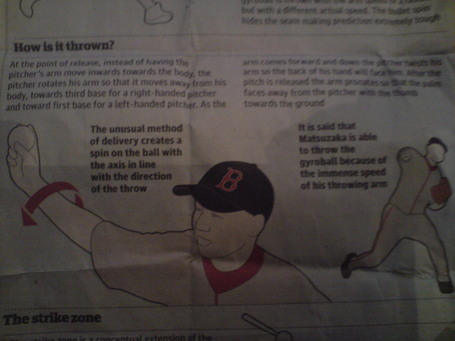 In this case, the top paragraph definitely isn't clear enough to read.

Ouch.  That sounds painful.  Try it, right now.  You're probably not at work, and hopefully nobody is around to watch you make yourself look silly.

Honestly, I don't know that much about the gyroball.  What I do know (that it's difficult to throw because of the physical restrictions of the body; that Matsuzaka may or may not actually throw the pitch depending on who you talk to) doesn't really clarify how it's thrown.  If this is how you do it, it's no wonder nobody does it.  It basically would make your elbow, wrists and shoulders explode, causing your arm to fall off of your body.  Which is a bit like leprosy, which nobody likes.

Finally, figure 3.3, which amuses me if only because it's one of baseball's basics: 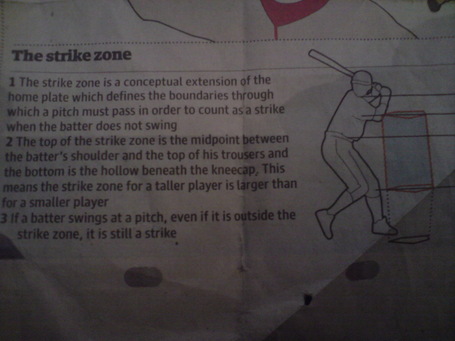 For those curious cats out there, the parallel lines coming away from our hitter designate the following, from top to bottom:  top of the shoulders, midpoint, top of the uniform pants and the hollow beneath the kneecap.

I watch a lot of baseball here in the UK, and I'm not always watching it alone.  In those instances, you'd be surprised how often I get a question whose answer sounds a lot like point number three above.

I'll leave you with what I promised earlier, the content from the sidebar of the article:

The Major League baseball season begins on Monday and any team with a pitcher who can throw the fabled gyroball - or miracle pitch - will start among the favourites.  The pitch was invented by Japanese scientists using computer simulations and involves the ball being thrown with a bullet-like spin which flies at pace and breaks suddenly just before the plate.  The idea was inspired by an American toy, the X-Zylo, which uses the gyroscopic effect to fly more than 500 feet with each throw.

Daisuke Matsuzaka was bought by the Boston Red Sox from Japan in 2006 in a $100m deal and is said to be the only Major League exponent of the gyroball.  The Red Sox are one of the favourites to take the Majore League crown.