A weekend is always better when you sweep!

For the third time in as many starts, Glen Perkins went eight strong innings.  Four hits and a walk managed just a solitary run for the Angels, as a steady diet of changeups and fastballs were enough to keep Los Angeles from getting anything going.  The only time the Angels reached second base was in the second inning, when they drew first blood.  From the third inning on, no one got past first.  Anytime you can say that, it's a good thing.  Right, Martha?

Looking at GameDay, it appears a number of pitches were logged as sinkers.  I have a hard time thinking they were sinkers, judging by what the data shows; it seems the "sinkers" were simply changeups at a slightly lower velocity. 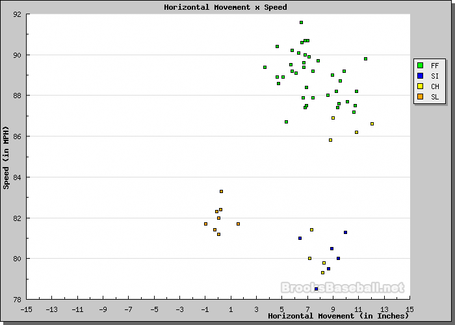 The yellow squares are changeups, while the blue ones are pitches that were tagged as sinkers.  From the perspective of pitch velocity and horizontal movement, there really wasn't a differentiation between the two.  What if we check vertical movement? 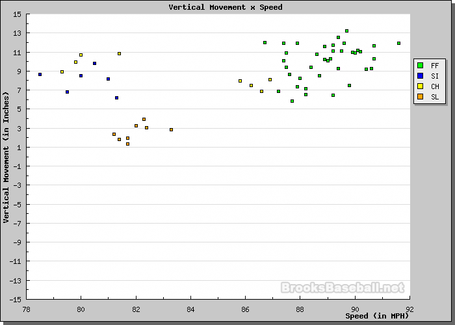 You could split hairs and call some difference here, but for all intents and purposes I'm happy to call every one of Perkins' splitters a changeup.  Whatever the case may be, Perkins essentially survived off of three truly identifiable pitches, and he rolled.

Shane Loux pitched a great game for the Angels as well.  He kept his team close and gave his offense plently of opportunities to help out the cause, but the Angel offense has been in a state of atrophy since Jason Kubel's grand slam on Friday night.  All the same, Loux was admirable;  seven innings and ten hits, but just three runs.

After mashing in the first two games of the series, Kubel hit the ball hard on Sunday afternoon but went hitless.  He earned at least two hits; unfortunately his efforts were hit right at someone with a glove.  Jose Morales picked up his first Big League RBI and a double; Denard Span and Carlos Gomez also knocked in runs.  Brendan Harris got the start at third, going 1-for-4 to keep his average above .400.

This series provided a microcosm of what you can get with baseball, and the Twins came out on the positive side in all three contests:  the comeback, the blowout and the close one.  Hopefully this momentum gets carried through this week, during which both Monday and Thursday are off days.