A little wild at times?  Sure he is.  But Mijares is starting to look very good.

In his third appearance since the 22nd, Jose Mijares came out last night and announced his presence with authority.  It was fastball after fastball, and sure...Meat walked the first guy.

Then Meat blew through the competition one, two, three.

It was the relief appearance the Twins needed, and after just three innings of work with the Twins this month has struck out five and allowed just one hit.  After the break, we'll walk through Mijares' eighth inning in Tuesday night's 4-3 win over the Rays.

It might have been nerves, the first batter up.  Mijares had his fastball all over the place, and even though pitch number five was probably a strike it wasn't as though Crawford was robbed of something here.  It's even more obvious how not in control of his fastball Mijares was when you look at his release points during this plate appearance: 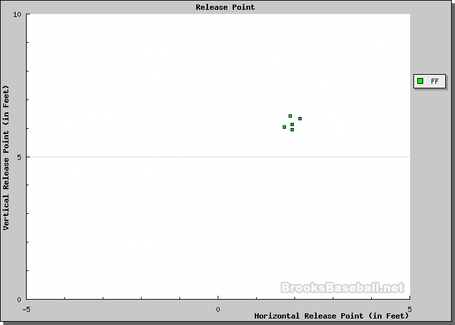 Pitching, just like swinging or throwing, is all about mechanics and muscle memory.  You do what you do to get the most out of what you're trying to do, which in Mijares' case was to hit his spots with the fastball.  Ideally when you're looking at this chart, you want to see a cluster of points that are partially overlapping.  Reading this chart tells us that Mijares was releasing his fastball at different points, either early or late, causing him to go a little wild.  The variation here is somewhere between six and eight inches, which it pretty wide for one pitch.  If you take the time to look at his release points for the following three hitters, you'll notice a smaller variation in release point, with the exception of one pitch to Longoria.

Mijares picked up a bit of an advantage facing Longoria, a guy who isn't afraid to take a pitch or two...which is exactly what he did.  Seeing Mijares struggle to find the strike zone against Crawford, and down by a run, Evan basically challenged the rookie to throw a strike.  And then another one.  Mijares came through with a pair of hard fastballs on both sides of the zone.  On the third pitch he momentarily lost control, quite possibly due to a hiccup in his mechanics; the pitch was two-and-a-half miles an hour quicker than his other fastballs but it got away from him.  Finally, with Crawford on the move, Mijares placed a fastball a hair under Longoria's waist.  He took a cut, and whether he was distracted by Crawford's jump or not, he missed.  One out, runner on second.

With the tying run in scoring position and just one out, Mijares and catcher Jose Morales cleary had a plan of attack after pitching coach Rick Anderson came out for a visit.  They stayed away from Pena, seemingly catching more of the black of the plate than the plate itself.  He kept Crawford honest at second, and on the final pitch of the at-bat stayed away for the third time and kept him from being able to pull the ball over the right-field baggy.  Pena swung right through the fastball.

For the first time since coming into the game, Mijares flashed his breaking ball on the first pitch.  It was out of control, but it let Aybar know the pitch was there, and suddenly he couldn't just wait on the fastball.  On the second pitch Mijares went back to that fastball; Aybar swung late and fouled it back off Morales' facemask.  Mijares induced a check swing with a second slider; whether Aybar actually committed I'm not sure, but he was definitely not expending the breaking ball and it was called strike two.  Finally, with the crowd on its feet, Morales set up on the outer half of the plate.  Mijares' fastball went right by Aybar, and it was over; threat contained.  After walking the leadoff man, he settled down and kept his composure.

Check out the average break for Mijares last night, first horizontal and then vertical: 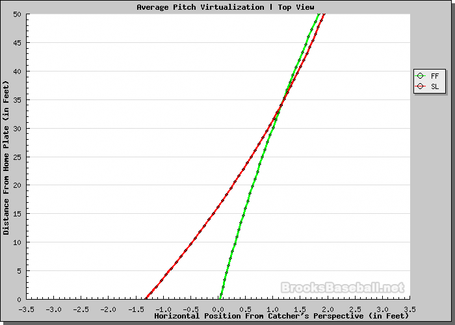 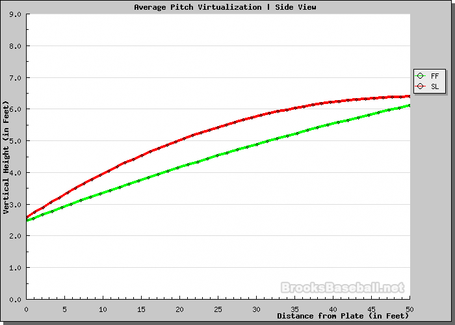 I know, I know...he only threw two sliders and one of them was a little bit crazy.  But that second one was nasty, too.  And no matter what, if Mijares is getting this vast differential in movement between his two primary pitches, he's going to be just fine.