Ladies and gentlemen, THIS IS OPENING DAY.

I realize some of you may be looking out your windows right now, from work or from home, and you're still seeing snow.  But you know what?  Today is Opening Day.

You know what?  It's a Monday.  Monday's can suck, especially if you work a standard office job.  But you know what?  Today is Opening Day.  And from today, for six months, the most beautiful game on the planet is here to grace your evenings.

Sometimes, your afternoons, too. 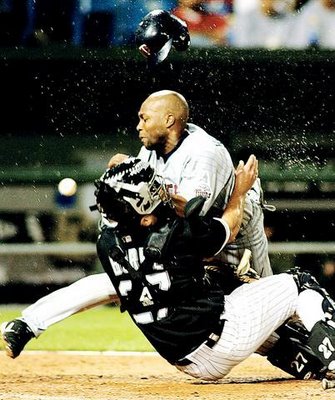 Ken Griffey Jr has returned for one last hurrah with the Mariners, giving his club one season with which to justify a ballpark that was built, seemingly, for him.  A few other veterans have been acquired as well, including Mike Sweeney, Russell Branyan and Jamie Burke (yes, you remember him...and he remembers Torii), but after gluttonous and irresponsible spending the last few seasons, Seattle's new regime has realized the need to rebuild.  A few hold-overs remain, like Jarrod Washburn and Carlos Silva, but this is clearly a team that (at least for 2009) appears to be biding its time.  Come the trade deadline, the Mariners should have a number of useful commodities that could help them turn the corner to contention a bit faster.

Felix Hernandez:  With a great fastball and complimentary breaking stuff, Hernandez (who turns 23 on Wednesday) has all the makings of an Ace.  He's a strikeout threat, he keeps the ball on the ground (52.1 groundball rate in '08) and he can log the innings.

Erik Bedard:  If the Mariners do want to contend in 2009, they need Bedard to have a big season.  He relies heavily on his fastball and his curve, and if he can stay healthy while mixing in a third and fourth pitch, he stands a very good chance of delivering the performance Seattle would like him to have.  Seattle dealt mega-prospect Adam Jones for Bedard, so at the very least I'm sure they'd like a decent return on him come July.

Carlos Silva:  Forget about the moronic deal Silva was served by Bill Bavasi's Mariners; what we saw in 2008 was the fracturing of a pitcher.  Silva survived with the Twins by guile, smoke and mirrors, keeping the ball in the park a little more often than he did last year, and luck.  Last season the baserunners caught up with him, and once they were on base he had a harder time keeping them from scoring.  If the Mariners want any of that ridiculous salary off their backs for 2010, Silva's resurrection needs to happen now.

Jarrod Washburn:  I'm just glad he's not a member of the Twins.  Seriously.  He's a decent veteran, and in general you know what you'll get from him on a yearly basis.  Unfortunately for the Mariners, what you get isn't necessarily positive.  According to FanGraphs, his FIP over the last three seasons has been between 4.72 and 4.78.

Yuniesky Betancourt/Jose Lopez/Ronny Cedeno:  Betancourt and Lopez are decent contact hitters, but with Cedeno on the roster after a few years with the Cubs they'll both have pressure to perform.  None of them are All-Stars, but between the three of them the Mariners have good depth in the middle infield.

Mike Sweeney:  At 35, Sweeney is displaying what looks like a pretty traditional career arc.  The ability is still there as far as hitting goes, it's just a matter of keeping him on the field and getting him his opportunities.  Adrian Beltre will be in the middle of the order, but having a healthy and productive Griffey and Sweeney would at least give the Mariners a little punch.

Ichiro Suzuki:  He's starting the season on the disabled list.  Bad for him, good for us.

With this group of hitters I can't begin to imagine how Seattle will compose their batting order, but I will take a stab at their positional card:

Branyan demolishes right handed pitching (.280/.377/.653 in 2008), but will likely sit versus southpaws like Liriano and Perkins.  Look for Sweeney to get the nod at first on those occasions, which could lead to the additional changes.

That's all there is for this early-season edition of the series preview.  We'll see you tonight for the game thread!