Seven innings of solid baseball erased by the sweetest swing in the history of baseball.

After pounding out two big-offense wins in the first two games against the Mariners, Nick Blackburn did a superb job of keeping them off the board in a close contest.  The Twins managed to support him with a pair of runs; Justin Morneau doubled in Joe Mauer in the third, while Michael Cuddyer singled in Morneau in the fifth.

Seattle hitters seemed to be baffled by Blackburn at times.  His 90-mph fastball missed a lot more bats than I expected, and he did a good job in general of hitting his spots with all of his pitches.  He had a bit of trouble in the second, but it was more about long at-bats (two of which ended in strikeouts) than it had to do with avoiding trouble with men on base.

Minnesota meandered into the eighth inning with a 2-0 lead, and after 99 pitches Blackburn was awarded with two innings with which to watch his bullpen nail down the win.  Jose Mijares started the inning, and quickly dispatched Ichiro Suzuki.

Then everything crashed, I blacked out, and woke up in the bottom of the ninth.  Here's what happened:

Sure, Craig Breslow would give up another gopher ball, this one to Lopez, but the damage was done.

If you were part of the game thread, you saw me tracking the Twins chances of winning.  At one point FanGraphs gave Minnesota an 87% chance of pulling off the victory.  It's amazing how quickly things can change. 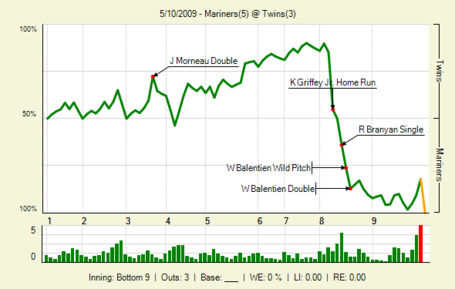 There was some excitement at the end.  Nick Punto singled to lead off the inning, and was singled in by Mauer three hitters later.  Eight pitches later the bases were loaded with two down, with Morneau and Michael Cuddyer loading them up with Mauer.  Brendan Harris battled Brandon Morrow for eight pitches, fouling off pitches near the zone before grounding out to third.

Blackburn earned a win tonight.  Six strikeouts, five hits and a walk over seven innings should be good enough, especially when you don't allow a single run.  But the story tonight wasn't Nick's great start, and it wasn't the runs the Twins managed to scrape together with timely hits.  Once again it was the bullpen, focal points of yet another massive let-down.