Justin Verlander K's 13; Twins Bullpen Isn't the One That Implodes

Share All sharing options for: Justin Verlander K's 13; Twins Bullpen Isn't the One That Implodes

It's nice being on the other side of that fence.

For five innings Thursday afternoon, Scott Baker and Justin Verlander matched each other pitch-for-pitch.  Verlander dominated while Baker was merely effective and efficient, making for a pitcher's duel that's usually advisable when facing off against the Tiger ace.

In the top of the sixth Detroit got to Baker.  Brandon Inge singled and advanced to third on great execution of a hit-and-run by none other than Adam Everett.  Baker fought back, striking out something called Dane Sardinha before popping up Curtis Granderson at the top of the order.  He then induced a fly ball to left field out of Ramon Santiago, which probably should have been a routine play for anyone with the ability to run and gauge the trajectory of a fly ball.  Unfortunately for the Twins, and Baker, Jason Kubel was patrolling left, and following an awkward jump and reach Santiago picked up a ground-rule double giving the Tigers a 1-0 lead.  Two bleeding singles, a walk and another ground-rule double later, Detroit had crossed the dish five times.  Inge struck out to finish the inning.

Baker's troubles were aided by a mis-played fly ball and a pair of seeing-eye singles, but he can't be let off the hook.  No, it wasn't as bad as the box score will indicate, but this isn't the first time this year we've seen Scott fall into a big inning.  The same thing happened in the seventh inning of a game against the Royals on May 3.  Even beyond that, it's been a rough start of the year for him.  He needs a string of good starts before his numbers begin to reflect the kind of pitcher he really is capable of being.

Verlander struck out Joe Crede on a high fastball before giving up a single to first baseman Brian Buscher and a walk to Nick Punto.  With two men on and a five-run lead, he was lifted for Bobby Seay.  His night went like this:

Zach Miner came on, walked Michael Cuddyer to re-load the bases, and then who steps in?  Tiger Killer Joe Crede.

Crede looped a Texas League single in between second base and center field, and with both Morneau and Kubel coming around to score Minnesota took an incredible 6-5 lead.

Justin Verlander?  Beside himself.  A career-high 13 strikeouts and a goose egg on the scoreboard destroyed in less than two outs.

During Cuddyer's at-bat, an inside fastball missed his jersey by a good four or five inches.  Replay showed it to be not a close call; easy decision.  But naturally Cuddyer made out like it grazed him and tried to take first.  When home plate umpire Paul Nauert correctly called him back, Ron Gardenhire was up and out of the dugout.  With the team and the crowd already fired up I'm not sure what his motivation was, but he proceeded to goad Nauert until he caved and tossed Gardy.  Under the circumstances I can only imagine the conversation went something like this:

Gardy:  Listen Paul, that pitch hit my guy.
Nauert:  No Ron, it didn't.
Gardy:  You sure?
Nauert:  It wasn't even close.
Gardy:  You mind tossing me anyway?
Nauert:  Why?
Gardy:  The LOST series finale is on my TiVo.  I'm jonesing for my Kate fix.
Nauert:  Wow.  Dude, I don't blame you.
Gardy:  I know, right?
Nauert:  YOU'RE OUTTA HERE!

Finally, to nail down the win the Twins were the benefactors of three scoreless innings by a trio of relievers.  Craig Breslow and Matt Guerrier bridged to Joe Nathan, and for the first time in what feels like a ridiculously long time, the bullpen did their job by holding a lead.  Detroit's counterpart wasn't so fortunate, getting rocked again.  Verlander earned a win; his relief just let him down.  You could say the Twins offense earned the comeback, because they certainly did, but there's no excuse for a bullpen to blow a five-run lead as efficiently as they did.

In the end this one goes to the home team, and a sweep of a division rival is always a good thing.  For the first time since May 1, the Twins are over .500. 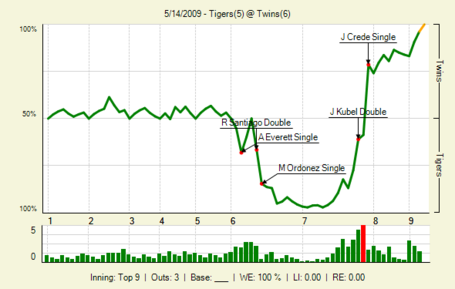