It wasn't sexy, with just a pair of strikeouts over seven innings.  But Nick still turned in one of his best performances of the season.  How did he get it done?

Over the course of seven shutout innings yesterday afternoon, Nick Blackburn threw just 82 pitches.  It's a bit surprising that he didn't at least come out to start the eighth inning, but after a losing streak like the one we just saw I'm not going to second-guess a win.  It was a great night (for everyone except poor LNP, who did lay down a great bunt in the second), and it's always gratifying to put up an Andrew Jackson.  On anybody, not just the Sox.

Overall, 65% of Nick's pitches went for strikes.  He slipped in a couple of pitches that don't fit into his normal repertoire, throwing a trio of balls that broke like two-seam fastballs.  More than half of his pitches were fastballs of some variety, and he combined those with nearly 30 breaking balls and a handful of off-speed pitches.

After going almost exclusively fastball for the first two innings, Nick began to show at least one other pitch per plate appearance to hitters.  This coincides with his second time through the lineup, and it continued through the end of his night where, in the last two innings, he was throwing more breaking balls than fastballs.

Blackburn got into trouble exactly once, and you can probably guess which inning.  In the third he gave up a couple of quick singles before walking Scott Podsednik...who was just as quickly erased on a double play.  Lightning has to strike for Pods to reach base twice in a game anyway, but he still managed to make a pair of outs on the bases.

Back to Black(burn), he worked quickly and efficiently for the entire contest.  Twice he seemed to struggle with the strike zone, but if his defense didn't immediately pick him up he was able to do it himself.

Every single inning, once the White Sox reached two outs the inning was over.  Nick was seven for seven, facing only one batter when faced in a two-out situation.

Finally, take a look at Nick's break charts.  They're more colorful than usual, with Gameday labelling certain pitches two-seamers and cutters and even one generic pitch simply called "fastball", but it's clear that in spite of not having strikeout stuff, Blackburn was able to show Chicago a number of different things. 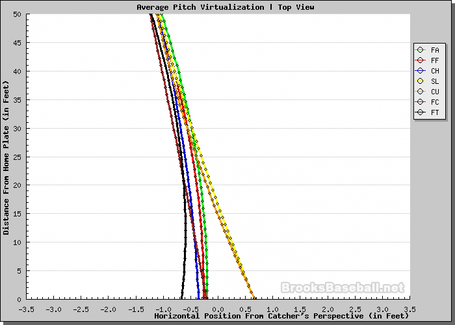 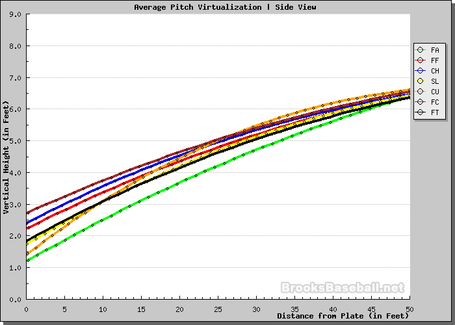 Ultimately, there were three keys to Blackburn's success last night.

This was exactly what the Twins needed to break out of the last six frustrating games, and right now, Blackburn is looking like the Ace of the Month.