Minnesota continues to slug its way to victory, while Scott Baker puts in his finest performance of the year.

A lot happened Sunday night.  Joe Crede left the game after being hit by a pitch (he's day-to-day), as did Joe Mauer (well, he was hit by a pitch, he didn't leave the game), Denard Span was pulled to to feeling "light headed", a lot of home runs were hit and Baker pitched into the ninth inning.  Oh, and it all culminated in a sweep of an old school rival.

The sweetest part of the action was watching Mauer turn on an inside pitch in the bottom of the first, pulling it into the upper deck for his 10th bomb of the season.  DId I say pull?  Yes I did.  To right field?  Yes.  I did.  After talking about how Joe compacts his swing on inside pitches in order to pull them, and thus reducing his power, he proved me wrong and I couldn't be happier.  He let Dave Bush get his first pitch across before demolishing what would only be the first Minnesota shot to the upper deck.

It was a beautiful sight.

Crede's two-run shot to deep left gave the Twins the lead for good, while Justin Morneau joined the Salami crew in the seventh.  After a Nick Punto walk and a Carlos Gomez single, Milwaukee reliever Mitch Stetter came inside on Mauer and caught his hand.  The intial call was that it was a foul ball; Joe's initial reaction was to offer at the ball before pulling up, but home plate umpire Adrian Johnson felt at some point the ball came into contact with the bat and called Joe back down the line.  Naturally, this illicited a response from Ron Gardenhire.

Gardy yelled.  Joe said "Aw, shucks, Mr. Johnson" and showed where the ball made its mark on his hand.  Eventually Johnson caved, and rightly so if the proof was right in front of him, and instead of Gardy getting tossed (which, let's admit it, we all thought would happen), Joe got first base.  Justice.

And then Justin went boom. 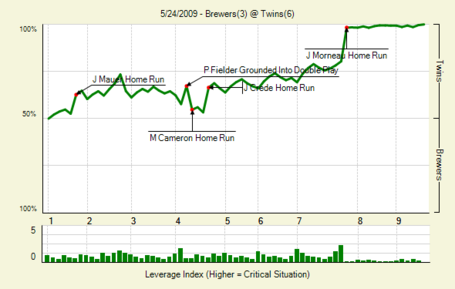 Justin Morneau's 13th ended Stetter's night, and pretty much Milwaukee's too, eliminating all but the slimmest of hopes for a late-inning comeback.  Scott Baker pitched into the ninth, getting one out before Prince Fielder went opposite field for a two-run shot that barely cleared the fence.  It brought Milwaukee within three, and Joe Nathan came in to slam the door.  Mike Cameron and Corey Hart struck out swinging to end the series.

The win brings the Twins to within one game of .500.  It was one of the best and most complete series of the year for the home team, so hopefully that "clicking on all cylinders" thing can stick around for a little while.