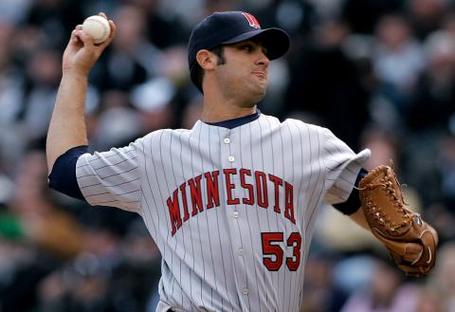 Gotta love the early games out east! It's like the return of Standard Time. I get an extra hour of sleep! Not looking forward to Tuesday nights out west. But, could be worse, could be in Ely England, when a west coast game ends just before breakfast for our fearless leader.

TV: FS North I will be watching to see if Anthony Lapanta wears his cold-weather hair piece. Try this some time: Google Anthony Lapanta. The second most pages in Google's index contain the keywords Anthony Lapanta hair. I guess I'm not the only one to notice that somehow he has hair growing over the lines in his forehead.

What's the over/under on Bert saying the following: "He left a ball up and he did not miss it"? I say 10 times this game. In Bert's world, all a pitcher needs to do is keep the ball down and nobody will hit it. Leave it up, maybe they hit it, maybe they miss it. Seems like an oversimplification to me. But what do I know?

Radio: As usual, the Twins Radio Network. Please John, wait 'till the game is well along to start talking about other games in other cities. Last night Gordo and Dazzle blabbed about Wrigley Field through an entire batter in the first inning. Placido Polonco was up (blah blah blah Wrigley blah blah blah wind blah blah blah ivy) and suddenly Maglio Ordonnez was grounding out to first. I seriously thought Gordo had Polonco and Ordonez mixed up (ya know, two Latino names and all). Not that they look anything alike or anything. But he's had worse mix-ups.

Keys for Nick Blackburn: Blackburn should benefit from the long grass of Comerica if he can coax some ground balls with his sinker. He needs to mix his pitches up or the Tiger hitters will start swinging hard at the first pitch. Blackburn is 2-0 with a 1.93 ERA in his last two starts.

Key's for Rick Porcello: Porcello needs to keep the ball in the ballpark, which shouldn't be so hard against the Twins in Comerica. The other key is throwing strikes. If the Twins are patient with the rookie, they can coax some walks and get him to start using the middle of the plate, where he's very hitable. He struggled to get his sinker down in his last start against the Yankees, and they did not miss it, roughing him up for six runs on six hits over 3 2/3 innings. The Twins hope he leaves some pitches up tonight and they do not miss them.