That's about par for the course for the season.

Sure, after Carlos Gomez and Mike Redmond singled in the fifth it looked like the Twins might actually get something going.  But Mark Hendrickson, and the rain, made sure there would be no late-inning rally. 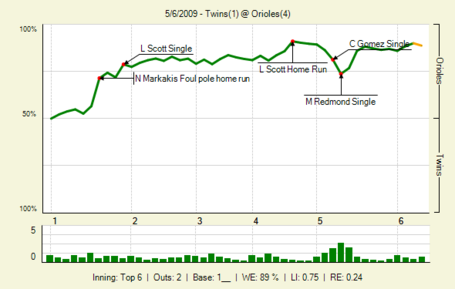 Ron Gardenhire was convinced the game never should have started in the first place:

Once we stopped the first time, we should never have gone right back out there. There was never more than a 15-minute window to do anything.

The delays were more the story of the game than the game itself, and it's just another disappointing chapter in what's been a disappointing season so far.

Denard Span had a nice assist at the plate, gunning down Cesar Izutris.  But Kevin Slowey was affected by the weather as much as he was the Orioles offense, getting sat down after three innings due not just to being ineffective but to being unable to get into a groove in between all of the delays.

It was a nothing game that sadly has to count.  Hopefully tonight will be a legitimate contest.