Runs Batted In: Opportunity vs Execution

Share All sharing options for: Runs Batted In: Opportunity vs Execution

Conventional sabermetric wisdom says that the RBI is a "dinosaur" statistic, less important or telling than other, "better" measures such as OBP, OPS, wOBA, or others. This is primarily due to RBI opportunities being out of the batter’s control. Whether a batter comes to the plate with runners in scoring position or with the bases empty is a result of the batting order and the hitters in front of him. As a result, RBI are often dismissed by the community as shallow; a relatively poor indicator of a batter’s true value to a team as a run producer.

What if we could reassess the RBI as a more meaningful statistic by leveling the playing field? In other words, can we normalize each batter’s RBI opportunities to gain a more accurate measure of the batter’s true success when driving in runs? Using 2008 and 2009 (through 7/1) data, I have done just that. You will see a number of familiar names at both the top and the bottom of the leader boards…

Justin Morneau: Elite Run Producer, or lucky to be batting behind Joe Mauer?

Over the past three years, no one on the Minnesota Twins has driven in more runs than the 2006 MVP, Justin Morneau:

That’s a lot of RBIs. Buthow much of this is Morneau the elite run producer, and how much does he take advantage of hitting behind one of the truly elite OBP guys in Joe Mauer? Let’s take a look at the number of RBI opportunities Morneau has had relative to the rest of MLB.

How do we normalize each batter’s RBI opportunities? First we must create a baseline. I collected data from the entire 2008 and partial 2009 (through 7/1) seasons, counting the total number of RBI for each inning situation (e.g., one out, runner on second base). I used this data to calculate the average number of RBI that one would "expect" a batter to drive in for a given situation. I call this "Expected RBI", or "eRBI". Not surprisingly, bases empty, zero or one out (0.028 eRBI) is the least RBI-friendly situation, and one out, bases loaded (0.766 eRBI) is the best situation for driving in runs. I then added up the eRBI for each player across all of his plate appearances during the season. Who were the leaders in expected RBI?

That’s a familiar name to Twins fans at the top of the list. Justin Morneau had more RBI opportunities than any other batter in Major League Baseball in 2008. That at least partially explains the 129 RBI last year. If Morneau were simply a league average run producer, he would have finished the season with about 100 RBI. This is yet a nother measure of the value of Joe Mauer. A couple of the other names surprise me. Garrett Atkins 3rd in the Majors? Jeff Francoeur? Three Mets in the Top 10? Whatever the reasons, Morneau had the most RBI-friendly batting order spot in the Majors last year.

Now that we’ve established a normalized set of "Expected" RBI for each player, we can calculate the number of "RBI Added", or "RBI Plus-Minus" by the player over the season. Again, many of the names at the top of the leaderboard are to be expected:

According to this measure, Morneau comes in 12th at +29.2 eRBI. Very good, among the elite batters in MLB, but somewhat below his #3 overall rank in RBI in 2008.

Of course, I always find it telling to examine the worst players in MLB:

A lot of slap hitter, leadoff types in this list. Considering that these hitters had relatively many opportunities (especially given Ichiro’s 749 plate appearances), it says a lot about their approach that they drove in so few runs.

Buscher and Monroe have to be considered the surprises here. Performance with RISP is the key for both, as Buscher batted .386 and Monroe had a 998 OPS with RISP.

Surprise! Delmon Young and Nick Punto at the bottom of a Minnesota Twins leaderboard. Shocking…

In 2008, the Twins led the league by far with a .305 batting average with RISP. One would expect the Twins to be near the top of the leaderboard in RBI +/-. In reality, the Twins were 11th in MLB with +29.2 RBI Added. Why the difference? I haven’t gone into the data in too much detail, but I suspect this is due to the lack of home runs by the Twins.

From a team standpoint, the Twins currently sit right in the middle of the pack, 15th in MLB with -5.4 RBI added. Even though we’ve seen a sharp increase in home runs, an even sharper RISP regression (down to .264, 11th in MLB) likely cancels out any advantage.

We see that many of the league's top RBI men are also at the top of the list in terms of RBI efficiency. This is not surprising, as the league's top sluggers bat in the cleanup spots behind great OBP guys for a reason. Managers (in general) aren't dumb. In the case of Morneau, the fact he has more opportunities than any other hitter has to be taken into consideration, but even with a more average number of eRBI, he'd only be losing 10-15 RBI over the season. Another reason Mauer and Morneau are a great combination for Twins fans.

Sorry I've written so few articles so far this year. This picture helps to explain why I've been busy with other things during the first half of the season. My son, Chase Von Peterson, was born on April 30th. His sisters, Audrey and Olivia love having a little brother and everyone's doing great. Mommy would have been in the picture, but she doesn't have a Twins jersey yet (Orioles Fan...). 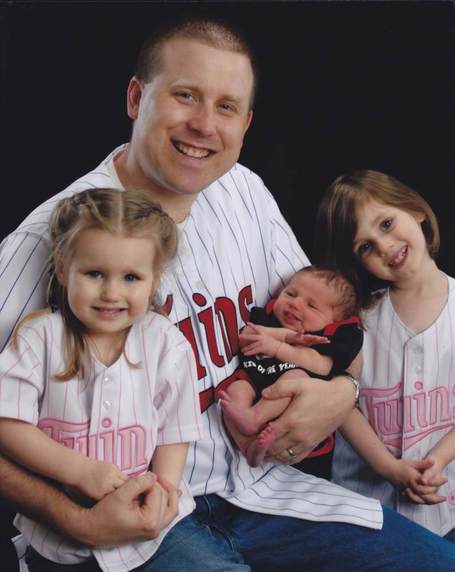