So far, Twins starters have logged three complete games this season.  Nick Blackburn owns them all.

In 2008, Kevin Slowey tallied a trio of complete games.  Johan Santana and Brad Radke each had three in '05, and the Bradke also had three in '03.  With half of a year left, Blackburn has the chance to be the first Twins pitcher since 2001 to throw more than three complete games in a season.  The last guys to do accomplish the feat were Joe Mays (four) and, naturally, Radke again (six).

It's been a stellar season for Nick to this point, and I think you'd be hard-pressed to find anyone who realistically thought that Blackburn would not just be the ace of the staff, but more than worthy of All-Star consideration.  His ERA is outstanding, at 2.94, and his 116.1 innings should give him the fifth-highest total in MLB.  The strikeouts don't look sexy, and the base runner numbers aren't elite, but there's no doubt that he's still been one of the most effective starters in the American League to this point.  And it's been a lot of fun to watch.

Sunday afternoon, Blackburn kicked it all off by stringing up eight goose eggs in a row.  Well, starting things off...topping them off...it was all the same today.  The Tigers did pound a pair of runs across in the ninth, when Brandon Inge (an All-Star in his own right) hit his 19th home run of the year, driving in Don Kelly who had reached when Denard Span dropped one in center.  Two runs, one earned, in nine innings for Blackburn, with six strikeouts and just a single walk.  Is that good?  Yes.  Yes, it is.

How did he do it, especially without a single double play?  Quick innings for a start, retiring the side with single-digit pitch totals four times.  Three pitches per plate appearance will always make for a quick night (one way or the other).  But nasty movement on his fastball was a pretty big deal.  Check it out. 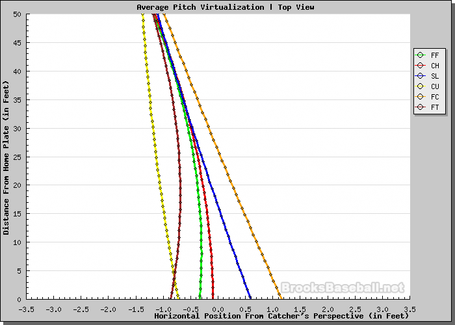 That's nasty movement.  If Nick can continue to get that kind of break on his fastball (a pitch that Brooks believes he threw 36 times on Sunday afternoon), he'll have no problem being consistently effective.

For their part, the Twins landed all six runs of Blackburn's support in one inning.  Poor Rick Porcello just couldn't get it together, and even when he made a good pitch he couldn't buy an out.  Let's illustrate the bottom of the fourth in bullet points...

It just wouldn't stop.  Porcello threw 39 pitches in the inning, which naturally was his last.  So where the Tigers were forced to go to a short bullpen, Blackburn gave his bullpen two days off.

Another series win in the books, and at 43-40 the Twins are now just two games out of first place.  Four series wins in a row under their belts, and things are starting to look pretty good.  The boys are off tomorrow, but a mid-week series sees the Yankees come to town before the White Sox close out the first half.