Share All sharing options for: Scott Baker: June 4 vs July 7

Nobody really wants to talk about what happened last night, and while we can offer conjecture on why it happened, the internet is great for telling us how things happened.  At least they are if you examine Pitchfx data.

During those painful three (plus) innings where Scott Baker was on the mound, Bert Blyleven constantly referred to Baker's mechanics.  How his arm motion and follow-through weren't in sync with his body, how his back was too straight and meant he was too "up-and-down" in his delivery, and of course the obligatory idea for a quick fix:  adding a couple of inches to his stride to land on the ball of his foot, which would force Scott to stop being so tall and help him keep the ball down.  All solid observations by Blyleven, and really the best reasons we have for the why's.

As for how they happened, Brooks offers some pretty pictures.  The idea is less analytical than it is observational, but we should be able to see how Baker's actual pitch flights differed between his good start in early June and his rough time last night.

First thing we'll attack will be the strike zone plot.  Whether you were watching the game live, on television, were listening to the radio, were watching Gameday or were simply reading last night's game thread, you noticed that a lot of Baker's pitches were left up.  But were they left up in the zone more often compared to Baker's last good start in the Dome? 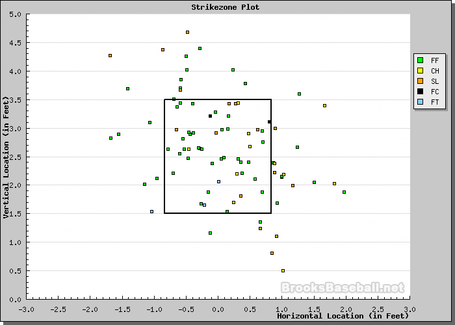 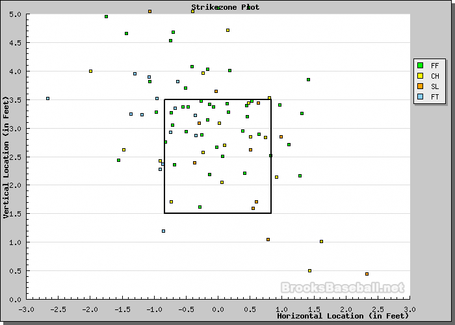 With the top graph representing the good start, and the bottom representing Baker's outing last night, it's pretty obvious.  Most pitchers, even having good games, will have a number of pitches that will be up in the zone, and all over the plot in general.  But only 20 of Baker's 86 pitches were below the mid-way point of the strike zone last night.  Against any major league lineup, and particularly against stacked teams like the Yankees, that's a recipe for disaster.  And really, considering that a lot of the hits off Baker were broken-bat singles and weakly-hit grounders, things could have been much worse, much earlier.

Checking out average flight trajectory from the side angle, you can see not only how his offerings were elevated, but you can see how flat each pitch was. 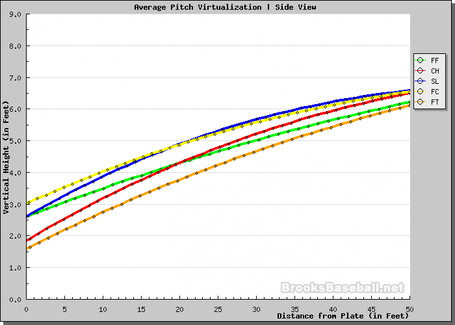 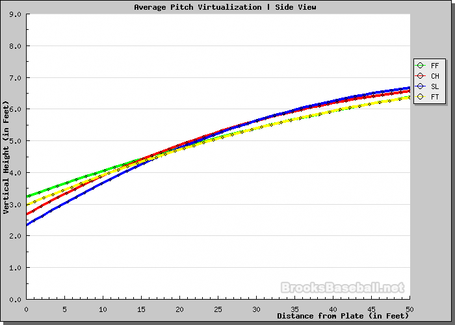 This last chart we'll look at isn't quite as easy to take in at a glance, but think of it like this:  good pitching takes repetition.  Velocity, movement, spin magnitude and spin angle; if any of these things are different, how effective that pitcher will be could change as well.  I'll tell you first that Baker's speeds were off last night, with his fastball coming in 89 - 92 mph instead of 92 -94. 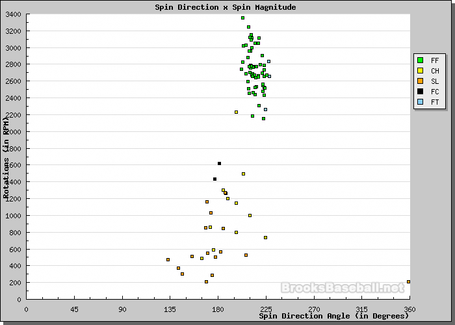 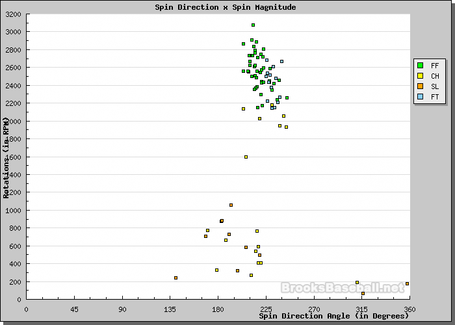 It was a recipe for disaster.