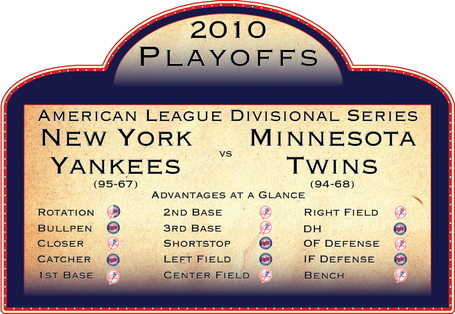 After Adam's position-by-position analysis earlier today, I thought I'd run a less in-depth matchup list that's based a little more on intuition...or, more accurately, a graphic I was messing around with yesterday.

Rotation: The one area that I split, it was hard for me to choose one side or the other. The Yankee hurlers of C.C. Sabathia, Andy Pettitte and Phil Hughes are certainly more well-known than Francisco Liriano, Carl Pavano and Brian Duensing, but based on this season's performance I'd say our Twins have had the better season as a group. But Sabathia is a Cy Young candidate, Pettitte's seen it all before and Hughes is no slouch. I could go either way on this one.

Catcher: No contest. Who has an over-under on the number of Jorge Posada passed balls?

1st Base: No contest. With all due respect to Michael Cuddyer, he's had a down season in spite of stepping in for Justin Morneau and being a clubhouse leader. Mark Teixeira can hit.

2nd Base: Orlandu Hudson's had an okay season, especially once you look past that cold September. But Robinson Cano might be the best offensive second baseman in the game.

3rd Base: This one actually is a contest. That's how good I feel about Danny Valencia, but no matter how good you feel it's not realistic to say he's a better asset at this point than Alex Rodriguez.

Shortstop: No contest. Derek Jeter is having the worse year of his career, and J.J. Hardy has been instrumental in Minnesota's surge in the second half.

Left Field: Controversial. But I like Delmon Young, I think he'll have a big series.

Center Field: Denard Span had a rough year. Curtis Granderson is too much to overcome here, even if we just looked at Denard's Target Field numbers.

OF Defense: We know the Twins aren't the best, and they certainly don't cover a lot of ground. With Brett Gardner and Curtis Granderson running around, the Yankees might as well just keep Nick Swisher in foul territory.

IF Defense: Catcher, third base, shortstop and second base, Minnesota's defense is superior.

Bench: The Yankees have some depth here, and some legitimate options to move things around if they don't work. The Twins have options for pinch running and late-inning defensive replacements, but if there's a matchup that Gardy doesn't like there's nowhere to turn.

What are your thoughts on these matchups?