On Tuesday morning, Justin Bopp of SB Nation sabermetrics site Beyond the Boxscore asked: How common is a one-win above replacement player? The graph he used to illustrate his point (below) made me wonder how the Twins' distribution of WAR among position players comapred to league average. 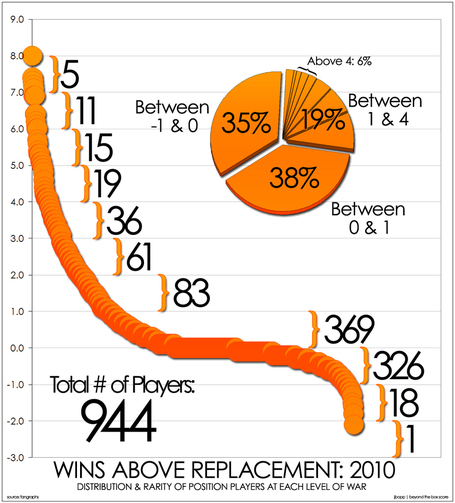 What stands out to me is that, out of the 944 players that Justin used to graph, 73% of them are players whose value is between -1 to +1 WAR. As we move beyond that range, players of increasing talent become increasingly rare.

After the jump we'll break down how many players the Twins had in each area compared to (something like) the league average. Join us, won't you?

Based on Justin's pretty graphic, if we break each section into a rough average by rounding up and down, let's see how stacked the Twins really were this year.

Considering all the players that dropped over the year due to injury, the fact that the got through the season with using just 21 position players is pretty amazing.

The other thing that stands out is that the Twins did have a good offense this season. They had a number of players who didn't just performe above replacement level, they performed to a significant level. Even if you exclude Morneau, which you kind of have to, the Twins had seven position players who were worth at least two wins. And even those replacement level guys weren't horrific.

Sure, if they played at the level they did in full time, a couple of them could have been horrific, but the Twins didn't need to rely on these guys to play significant time.

The final thing that stands out, and you'll probably agree, is that of the eight position players worth 2+ WAR, two of them are free agents and one is bizarrely a non-tender candidate (they total 9.1 WAR combined). While Kubel and Cuddyer could certainly be pegged for rebounds next summer, replacing that kind of production would be a tough job.

In conclusion, this chart is just one more way of showing us what we already knew: the Twins had a talented squad in 2010. But there's also a by-product: replacing and replicating that talent might prove to be a challenge. Over the last two days we've been given a few clues as to the direction this organization wants to go over the winter (starting pitching is a priority, the Twins will be players in international signings, the middle infield is a concern), and that's a good thing. With the due date for arbitration offers and the Winter Meetings just around the corner we'll get a few more very soon.

It gets fun from here, and it will be interesting to see where the Twins try to replace that production from.