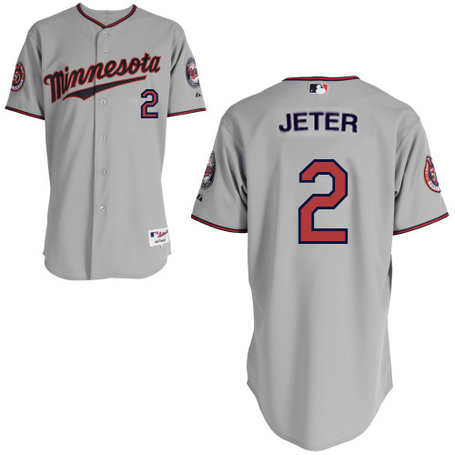 I thought this would be fun, mostly because it's completely off the radar of reality...isn't it?

ESPN reports that the New York Yankees will meet in Tampa Bay to discuss how to move forward on the issue of free agent shortstop and icon Derek Jeter. While Brian Cashman has said that he believes Jeter is the best option to play short for the Bombers in 2011, there's little doubt that the front office is thinking to the future.

Hal Steinbrenner says the Jeter negotiations "could get messy".

Hal Steinbrenner is quoted by the New Jersey News Room as saying he "absolutely wants" Jeter back in Yankee pinstripes in 2011, "but is not ready to write a blank check". Meanwhile, Jeter's agent, Casey Close, understands that keeping Jeter in New York is about more than what happens on the field:

"Clearly, baseball is a business, and Derek's impact on the sport's most valuable franchise cannot be overstated. Moreover, no athlete embodies the spirit of a champion more than Derek Jeter."

ESPN New York also mentions that the Yankees seem likely to offer a three-year contract worth up to $60 million.

Seen as a backup measure, in case something can't be worked out, the Yankees offer Jeter arbitration.

MLB Trade Rumors picks up on a Tweet from Peter Gammons, who has heard that the Yankees are discussing offering Jeter a three-year, $45 million dollar contract. While Jeter and Close deny that any offer has officially been made , the New York front office does not comment.

In a move that shocks the readers of Twinkie Town, Joe Christensen at the Strib breaks that the Minnesota Twins will non-tender J.J. Hardy before 11pm as the non-tender deadline approaches. As Jesse repeatedly bashes his head against a wall 10 or 20 times, the official position from the Minnesota front office is that "the numbers just didn't add up".

"The only way we could have made it work was if we were able to sign J.J. to a multi-year deal," Smith said by phone. "We liked J.J., we liked what he brought to the table, but a lot of different factors played into this decision. Ultimately baseball is a business, and we just couldn't make it work."

During the second day of the Winter Meetings, an unnamed member of the Yankee organization reveals that there had been no three-year, $45 million offer to Jeter from New York. The New York media is split between outrage and, oddly considering the subject of the controversy, acceptance.

J.J. Hardy signs with the San Francisco Giants, replacing Edgar Renteria. It's a four-year contract, worth $34 million dollars. While the media are shocked at such an aggressive offer from Brian Sabean and the Giants, the pay structure of the contract ($6 million in 2011, $8 million in 2012, $10 million in 2013 and 2014) isn't outrageous. What surprises Twins fans, and makes the blogs happy that Minnesota didn't offer the same deal, is that the contract is guaranteed--without incentives.

With hope of a reconciliation between Hardy and the Twins gone, speculation around Twinkie Town is that the Twins will attempt to bring back Nick Punto on an affordable one-year contract.

The Boston Globe reports that Derek Jeter is making a visit to the Red Sox. Marco Scutaro, under contract with the Red Sox for 2011 with an option for 2012, defers judgment to the organization when asked his thoughts:

"Derek Jeter is a household name. If there's an opportunity for us to bring in a player of his talent, you have to look into it."

Silence and the lack of news between Jeter and the Yankees continues to build frustration in the media and the fanbase.

On the day that it's revealed that Jeter also has visits planned to Atlanta, Cincinnati, Detroit and St. Louis, ESPN breaks news that the Yankees have officially put an offer on the table for their longtime captain: two years, $35 million ($17 million in 2011, $18 million in 2012), plus a vesting option for a third year at $20 million if he would reach 600 plate appearances in '12.

It's rumored that the offer is on the table for 72 hours.

"Derek is an icon, and a future Hall of Fame shortstop," said an animated Close. "More than that, he's the best shortstop in the history of the famed Yankee organization. What he means to his teammates, the organization, the great city of New York and America's pasttime can't be quantified, but what is certain is that the Yankees have a lot more to lose here than they're willing to admit. Having Derek Jeter in a Yankee uniform is about more than what happens on the field."

While the Steinbrenners can't be reached for comment, GM Cashman responds on a live interview on WFAN:

"We understand perfectly well what Derek means. Not just to this team, but to this city and to baseball. But we have to be realistic. We can't write a blank check."

He dodges questions regarding the 72-hour deadline, which expires tomorrow...on New Years Eve.

Nick Punto signs with the Cincinnati Reds for one year, $2.5 million dollars. The Reds organization says he adds defensive depth to their bench. The contract has incentives based on games played, as well as a club option for 2012 worth $4 million.

Peter Gammons reports for MLB.com that Jeter and Close have rejected the Yankees' offer, which did not expire after 72 hours. Neither the Yankees nor Jeter or Close return voicemails or texts, although "a party close to the negotiations" insists that both sides are still optimistc of a deal getting done.

Minnesota, who had agreed to terms with all of their arbitration-eligible players, trades Matt Capps, Kevin Slowey and Ben Revere to the Los Angeles Dodgers for reliever Hong-Chih Kuo, utility infielder Jamey Carroll and a low-level minor league pitcher.

The Twins give votes of confidence to their minor league pitchers, implying that the fifth rotation spot will be available for the best fit come spring training. Speculation heavily involves Kyle Gibson, David Bromberg and Alex Wimmers, although many feel Jeff Manship may get the nod out of spring training.

The Yankees and Jeter exhange arbitration figures. The Yankees are offering $15 million. Close counters with $23 million.

The Twins trade Jason Kubel, Rob Delaney and Anthony Swarzak to the Royals for David DeJesus. While a majority of Twins fans believe their team traded away too much for potentially just one season of DeJesus, a majority of the fanbase is also in favor of having DeJesus in a Twins uniform.

A number of teams have been rumored to have made offers to Jeter and Close, but nothing can be confirmed. Buster Olney claims the Twins could be a dark horse contender, as one of the few contending teams in need of an everyday shortstop. He is mocked heavily.

MLB Trade Rumors lists the estimated six teams who are "in" on Jeter. While maintaining that the Yankees are still the favorite to sign him, nothing appears imminent. For the first time in the abundant Jeter speculation, they also use one of their favorite terms: mystery team. Tim Dierkes mentions the Twins as a potential mystery team, based off Olney's speculation, the team's need for a shortstop and what would appear to be enough payroll if the Pohlads were willing to take a gamble.

No news of an offer from New York, nor a counter-proposal from Close, has been heard of since Close refused the Yankees' offer over three weeks ago. As reporting day looms and Jeter's future remains uncertain, offers from other teams around the league stop as they wait for him to make a decision.

The Yankees, meanwhile, say they will head into spring training with the idea that Eduardo Nunez could be their starting shortstop.

Close admits that the Yankees weren't meeting his expectations in terms of a multi-year contract offer:

"I know Derek really wanted to get something done. Obviously the goal is to get him back into a Yankee uniform in time for spring training, but ultimately we have to do what's right. Right now, I don't know. If we have to wait for the arbitration hearing, we'll do that, and maybe we can work out a longer deal at a later date, but I know that's not Derek's preferred course of action. He wants to retire a Yankee. Hopefully we can make that happen."

The arbitration hearing is scheduled for February 18.

Rumors surface that, if the Yankees and Jeter can't work out a deal before their arbitration hearing, Jeter will sign with the Atlanta Braves. The New York media continues to rage but it feels empty, which is echoed by a fanbase which appears resigned to the fact that they may not have their icon in a Yankee uniform.

The Braves pull their offer for Jeter, amid concerns "he's not a part of the direction we want to go". Reports surface from behind the scenes that imply the Braves couldn't justify that much money for a player whose value may be tied up largely in his iconic status.

In a move that shocks the baseball world, the Minnesota Twins sign Derek Jeter to a one-year contract worth $18 million plus performance incentives.

As Twins bloggers and number crunchers tear their clothes off in bewilderment, the mainstream media is a cross section between praising the organization and questioning how they can commit that kind of money to a single player when those funds could have been used earlier in the season to shore up so many other holes. Local beat writers defend the decision, saying the unique circumstances and other trades allowed them to jump at this one-time, one-year opportunity.

After playing 136 games for the Twins and batting .288/.369/.431, Jeter's eleventh inning single in game three of the ALDS gives the Twins their first post-season victory over the Yankees since 2004.

But the Yankees still win the series.

Moral of the story: SEE?!? DEREK JETER GETS YOU NOTHING!!