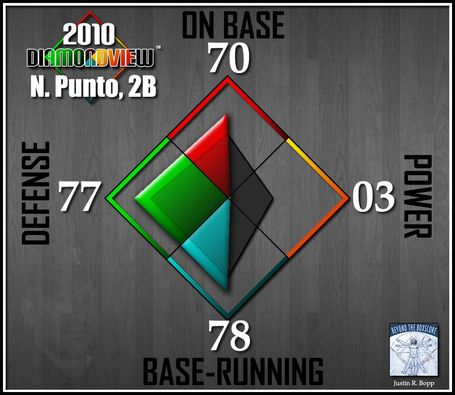 This is a series that will truly be kicking off next week, but Nick Punto Day seemed like a perfect time to introduce the series.  That beautiful graphic to your right is called a DiamondView, and it was developed by the incomparable Justin Bopp of SB Nation's sabermetrics site Beyond the Boxscore.  I'll go over it in brief in each post of the series, but for a detailed explaination of what the graphic with all the pretty colors means, check out Justin's introduction to DiamondView 2.010.  (New this season is also the Pitcher's DiamondView.)  A great thanks to Justin for agreeing to work with me on this, and I don't know about the rest of you but I'm pretty stoked to see what the rest of our Twins look like when he rolls through the AL Central next week.

The purpose of this series will be to preview some of the guys we expect to see in a Twins uniform this year--look at what role(s) they'll play, what their expectations are and what their strengths and weaknesses are as well.  Using Justin's DiamondView is an easy, yet saber-friendly way to express how players grade out for 2010.  The colors represent Punto's placement (i.e. he scores a 70 for getting on base, whereas the player with the best OBP would get top marks) among second basemen (yes, the graphs are adjusted for position).  The shaded area underneath represents the positional average.

After the jump we'll examine Punto's strengths, weaknesses, expectations and ultimately what his role with the Twins is likely to be in 2010.

A large portion of Punto's value comes, without surprise, on the defensive side of the ball.  His versatility knows no limits between second base, third base and shortstop, where he's logged 1772.2, 1788.1 and 1775 innings respectively throughout his career.  According to UZR/150 he's actually graded out much stronger at short and third, but looking forward it might be second base that suits him best (where range factor insists he has the most range).

While Punto grades out well on the speed scale, this also translates to his range in the field.  He's not the tallest guy, and that limits his reach, but he moves to his left and his right with relative ease and on most occasions if he can get to the ball he'll convert the out.

On the basepaths he's quick, and I can't decide if all the effort he shows in his face makes him look faster or slower.  At any rate he made fewer mistakes on the bases than most last season, even if his gaff against the Yankees in the playoffs is what stands out in our minds.

His one strength on the offensive side of the ball has been his walk rate.  In five seasons with the Twins he's never walked in fewer than than 8.2% of his plate appearances, and last season posted a career-high 13.9% walk rate.  Which is incredible.  In his career he walks one of every ten plate appearances.

Apart from taking walks, almost the whole of his offensive value is pretty low.  There is no power (career ISO .076), he can struggle to hit fly balls which can result in frustrating streaks of infield flies, and in spite of good plate discipline he can get caught up in the moment and expand his strike zone.  This is especially true when he stands in as a left-handed hitter against right-handed pitching (21.1% strikeout rate, as opposed to just 13.7% as a right-handed hitter versus southpaws).

In the field his biggest weakness is his arm.  With Orlando Hudson locked in at second, Punto's weakness may be exposed a bit at third base, where he'll be forced to throw across the diamond.  Justin Morneau has a good glove at the opposite corner but you really don't want to tempt fate more often than necessary.

Notice how identical all of these predictions are?  All it tells you is that whatever happens, Punto is a pretty sure bet in regards to what you can expect.  Entering his age-32 season he pretty much is who he is, and barring a season where Punto starts bashing out line drive after line drive then this is your guy.

As much as Punto will always be the benefactor of some Gardy-Love, he's still going to have to earn a starting role in spring training.  With Brendan Harris fresh off of his two-year contract, Punto will need to prove he's the man for the job.  Whether he wins the opening day job at the hot corner or not, Punto's ability to play a number of infield positions well means he's still going to get his share of plate appearances.

It's hard not to bash on Punto a little bit.  At his best he's an on-base machine who can field his position more than adequately, while at his worst he makes horrible contact and is a sure out who at times completely loses any concept of what baseball fundamentals really are.  Popping up a bunt, swinging at the first pitch, sliding head-first into first base...these things will drive you up the wall.

But having a guy like him around to spell your regulars in order to keep them fresh means that, in spite of his drawbacks, Punto carries value.  He's a super-sub, and any competetive team needs role players.  Punto gives Gardenhire options.

He plays with passion and he wears his heart on his sleeve.  He can run and he can field and, PA for PA, he walked more than Joe Mauer last season.  He's exposed as a starter, especially when he hits a slump.  But coming off of the bench and while he's on a hot streak, you couldn't ask for much more.