Why We Need a Real World Baseball Classic

Share All sharing options for: Why We Need a Real World Baseball Classic 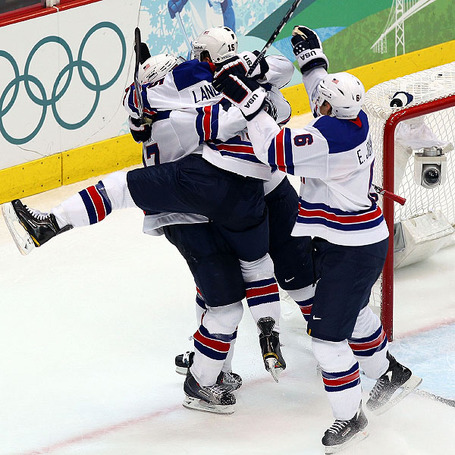 If you're here, you're a sports fan, and if you're a sports fan - boy, I hope you watched the USA-Canada Olympic hockey game last night. It was only a preliminary-round game, and NBC thought so little of it that they dumped it to MSNBC, but - my word.

I don't know what else you can ask for in a sporting event. There was a deeply partisan, keyed-up crowd in Vancouver. The world's best players were on display.  I can't quite describe the atmosphere of the game; it was like the seventh game of a hockey playoff series, combined with a USA vs. Mexico soccer match in Mexico City. It's an enormous rivalry. Canada is the home of hockey, and yet the Americans are the world champions at the under-18 and under-20 levels. Add this loss, and you can about imagine how much it all bothers our near neighbors to the north.

Take a look at that picture. That group celebration eventually ended up as a pileup behind the net, five grown American men celebrating like high school kids who've just won a state championship. How can you not love an event like this?

So let me take this occasion to make a renewed call for something I think is long overdue: a midseason break for a true World Championship of Baseball.

We all know that the World Baseball Classic, while fun in 2006 and 2009, was a bit of a joke. It was played during Spring Training, when most players aren't ready to give 100%, and was done without the full support of just about anyone involved. Some players didn't want to risk injury, and major league teams were positively aghast at the notion that something could be more important than "real" games. It was certainly fun - see the two Netherlands wins over the Dominican Republic in 2009 - but it still was a glorified exhibition.

Let's skip the All-Star Game, take a two-week midseason break, and let major-league players represent their countries. It'd be like the playoffs in midsummer, except with worldwide interest and national pride on the line.

I'm sure you can think of valid logistical reasons this wouldn't work, and I'm equally sure that those issues aren't insurmountable. I think most players would jump at the chance to represent their countries at a truly meaningful championship. I think fans - especially those from countries outside the United States - would love it. It'd be a great thing for baseball, a worldwide game, to have a truly worldwide championship.

Soccer's World Cup is the biggest event in world sports. The most recent Olympic hockey and basketball tournaments have drawn huge interest. It's time for baseball to get on board and put together a real World Championship of its own.