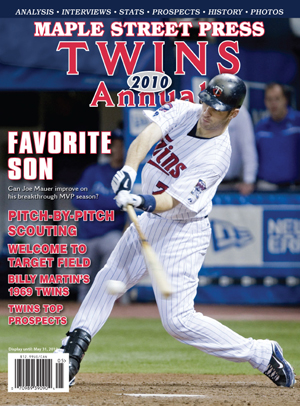 I don't need a lot of words to summarize the Maple Street Press Twins 2010 Annual. If you enjoy the productions of John "Twins Geek" Bonnes's media empire - the old GameDay Magazine, the "Dugout Splinters" program inserts, the "GameDay Chatter" segments on KSTP Radio - you will enjoy the Annual.

The heart of the magazine is the four-man TwinsCentric cabal: Bonnes, Parker Hageman, Seth Stohs, and Nick Nelson. It's a quartet that's been responsible for two previous publications as a group - a Trade Deadline Primer and Off-Season GM Handbook last year - and has recently started its own blog on startribune.com. As the saying goes, this is not their first rodeo.

A reader might expect their newest work to be nothing but numbers, to come in a plastic wrapper and with a cover promising "EXPLICIT HARDCORE SHOTS OF OPS+ AND UZR LEAVING NOTHING TO THE IMAGINATION." There are certainly numbers, of course. The magazine begins with 20 pages of player previews, chock full of piles and piles of information. You may not have known that Denard Span hit .344 against sliders last year, but Delmon Young hit just .181 against the same pitch. You can find that information. You can find out that Scott Baker threw first-pitch fastballs 57% of the time, that Brendan Harris was the 277th-best hitter in the majors against the fastball - oh yes, there are numbers. You'll also find highly analytical essays not only from Stohs and Bonnes, but from Twinkie Town staff writer Adam Peterson and KFAN's Phil Mackey.

For those of us who are stats junkies, this is good. I like numbers, and if you're a regular reader of this site, I'm guessing you do too. If you fall into this category, though, you don't need me to tell you whether or not to buy this magazine. You already did.

The real test of this magazine, I think, is this: is this something non-statheads would enjoy?

The Annual contains more than just numerical looks at the game. This is a much broader work than the group's past two publications, much more in the tradition of the GameDay magazines that were once sold outside the Dome. It includes more writers to round out the coverage, like Cool of the Evening author Jim Thielman - and these, to me, are the best parts of the magazine.

I particularly enjoyed Thielman's story of the fighting days of the 1969 Twins, Alex Halsted's essay on the major-league journey of Denard Span, and a look at the limestone of Target Field - seriously - by Judd Spicer. And there's more:

And there's more beyond that; I hardly need run down every article in the Annual.These articles are the reason I'm willing to give the Annual a thumbs-up - outside the analysis, it's still a good read. Even if you don't care about the intricacies of JJ Hardy's pitch selection, the magazine's still worth your time and your $12.99.

The TwinsCentric crew, in some ways, represents the evolution of the much-loved GameDay Magazine. For me, this annual is their best representation yet of that same spirit. I'll have it close at hand this year - not only for statistical reference, but to occasionally re-read the rest of the volume.

I promised few words of summary. Here goes: Enjoyed it once. Looking forward to enjoying it again.