As I shamelessly mentioned several times over the past two weeks, last Saturday, I had a chance to judge a competition at Rock Bottom Brewery to find the "biggest Twins fan," as determined by an objective scoring system that nobody quite understood. Four finalists, three judges, TC Bear, and plenty of Twins fans seeking 2-for-1 drinks showed up. A few photos, below. 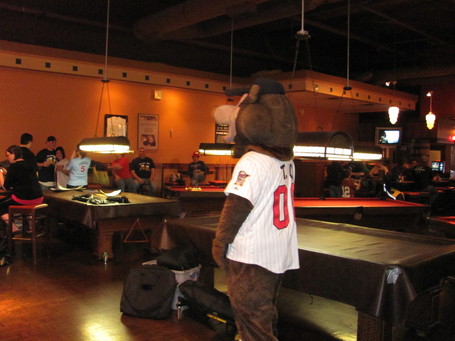 There's nothing worse than seeing a lonely bear loose in a bar, is there? 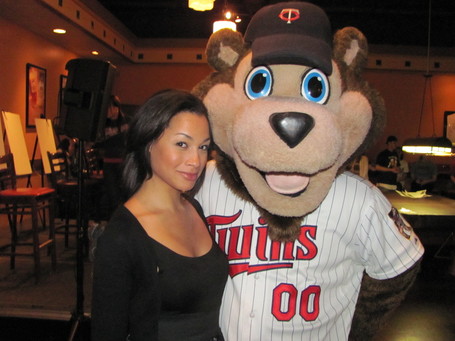 A much happier bear, along with former Miss Minnesota USA Erica Nego, who was one of the judges. 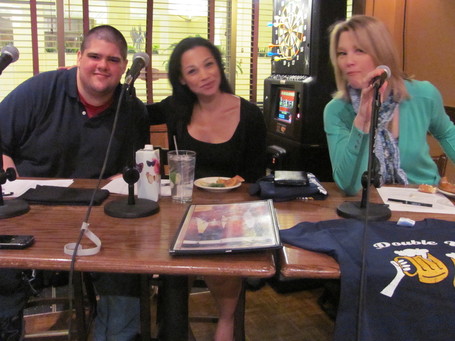 Your three judges for the evening. From right to left we have M.A. Rosko from Fox9 News, who as a television journalist is qualified to objectively judge contestants on their poise and ability to perform in front of an audience; Erica, who runs a finishing school and is Miss Minnesota USA and is therefore more qualified than anyone to judge contestants on their style and grace; and me, who writes lots of jokes about Nick Punto being short, and is qualified for virtually nothing. 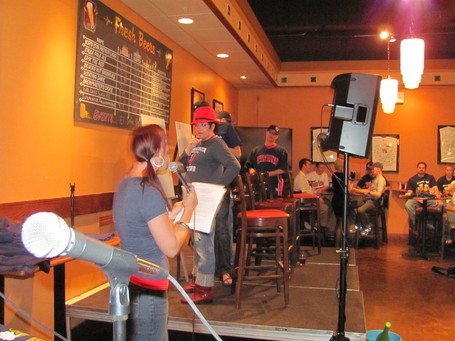 A nicely blurry shot from the judges table of the contest setup. In the background are the four contestants, Michelle, John (of TwinsMVB.com fame), Ross, and Joel; in the foreground is the emcee, Dawn Brodey; in the very near foreground is a microphone, which your photographer/judge forgot to move out of the way 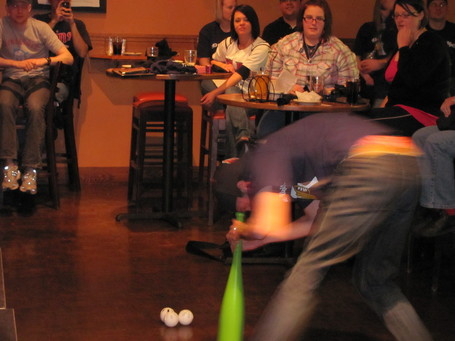 The contestants were given nine "innings" of challenges. We had several trivia questions, including a "match the quote to the announcer" challenge. Contestants also had to whistle "Take Me Out to the Ballgame," do their best Ron Gardenhire and Bob Casey impersonations, and show what they'd do to get circled by Bert.

This photo is of none of those challenges. This challenge involved putting one's forehead on a bat, spinning around ten times, and then attempting to toss Wiffle balls left-handed into a bucket. Several contestants had been drinking. Points eventually had to be awarded on the basis of "which contest fell down the most gracefully." I voted for John, seen here in mid-spin, because he was the tallest and therefore had the hardest time of actually getting his forehead on the bat. 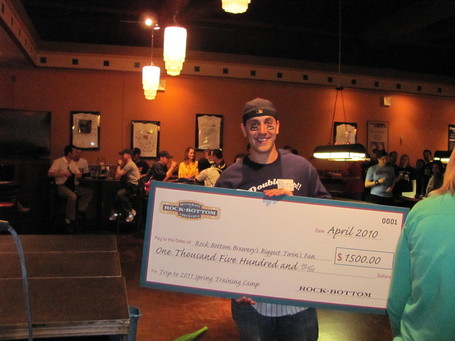 Your eventual winner was Ross, who helped his cause by bringing most of his family and friends to help cheer him on. (The contest did come down to a tiebreaker challenge - who could do the best imitation of TC Bear.) Ross got a giant check to take home, which made everyone quite jealous; he also gets a trip to next year's spring training.

All in all, I quite enjoyed myself, and not just because I got to watch people fall over while I made snide comments. (If I wanted to do that, I could watch the Royals play! HI-YO! /ed mcmahon laugh)

Thanks to Rock Bottom Brewery for putting on the event and for letting me be one of the judges. Sarah at ThoseGirlsBaseball.com also got some (much better, it must be said) pictures of the event, and Jen from Lipgloss & Baseball posted a few on Twitter, as well.