Did Paul Emmel Have Somewhere to Go?

Share All sharing options for: Did Paul Emmel Have Somewhere to Go?

There were a lot of strikeouts in last night's game (22 if you were counting), and a number of them were on called third strikes.

Through the seventh inning none of the called third strikes appeared to be the wrong call.  Francisco Liriano had five strikeouts that came without a swing through seven innings, and none of them were anything worse than on the edge.  Come the eighth inning, however, the four plate appearances that ended in called third strikes looked like terrible calls.

The Twins weren't being singled out here, as Ramon Santiago was called out on a Liriano fastball that was pretty far inside.  But Brendan Harris, Denard Span and Joe Mauer were all rung up on three bad calls--particularly Span and Mauer, whose called third strikes were further away from the strike zone than previous pitches from the same plate appearance that were called balls.

I don't blame Emmel for ejecting Span, because you shouldn't ever argue balls and strikes.  Emmel's going to remember that the next time he's calling the game and Denard steps into the box.  But it's impossible to defend these calls as anything other than what they were:  terrible.  And four times in two innings tells me just one thing:  Paul Emmel must have had a hot date. 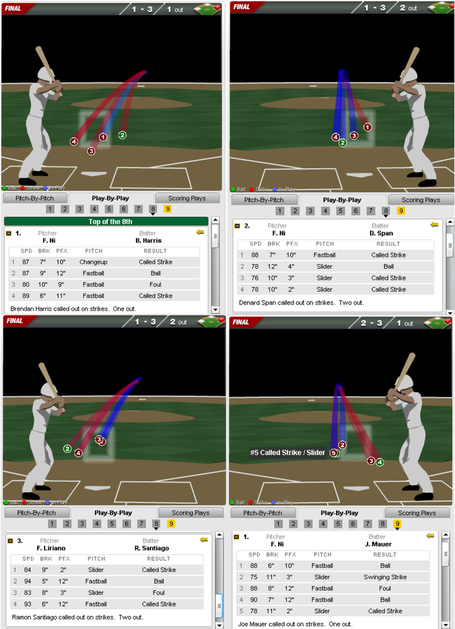