Share All sharing options for: Jesse's Visit to Target Field

I spent 10 glorious days in the States not too long ago.  You may have noticed that the site was under full control with Jon, Adam and Stu for the week, with a little help from Cmathewson.  (Thanks again guys!)

These pics are from Sunday, May 30th, when the Rangers were in town.  It was ESPN's Sunday night game of the week.  Enjoy! 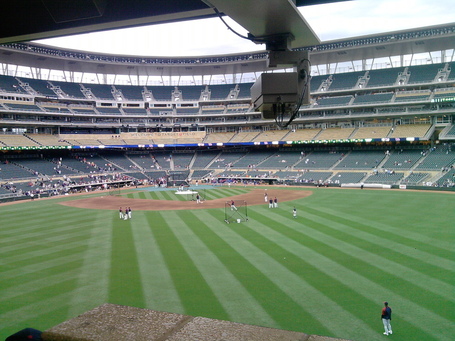 I, quite literally, stopped to take pictures of everything.  I'll just be sharing a few with you, but suffice it to say:  Target Field is beautiful.  It rained off and on through the first couple of innings, and I was determined to sit through the entire thing.  I didn't care how hard it rained or how wet I got. 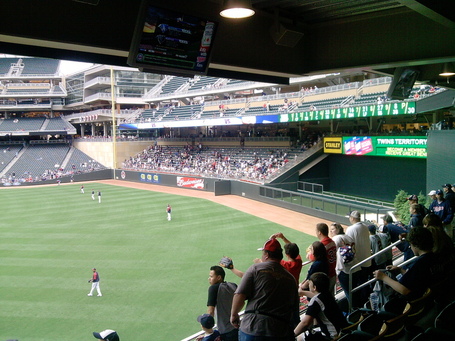 Pretty sure this entire section was already drunk. 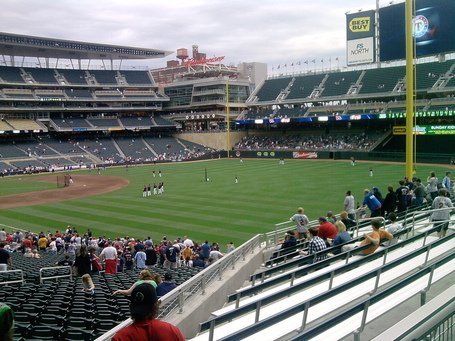 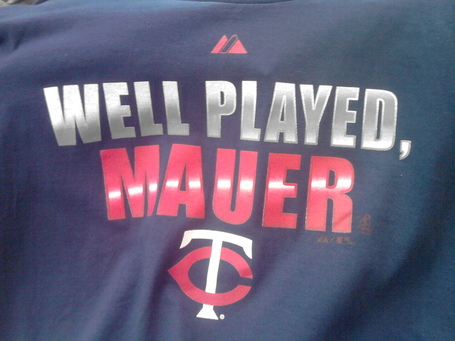 Yeah, so apprently this is a shirt now.  I even heard Dick Bremer say this the other day when Mauer made the catch behind the net.  At the game he threw out a would-be base stealer, and the clip from the MLB '10 The Show commercial popped up on the massive jumbotron thing:  "Well played, Mauer."  And everyone went nuts! 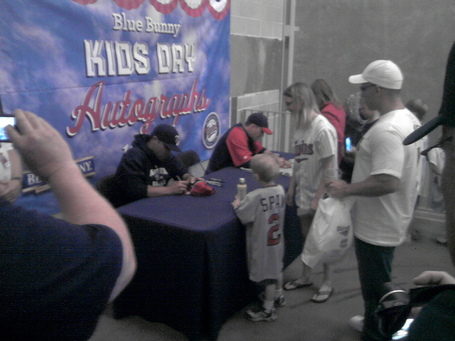 That's Alex Burnett on the left and Brian Duensing on the right.  No, I didn't get an autograph.  That's for the kids.  But that didn't stop me from taking a pic on my way by! 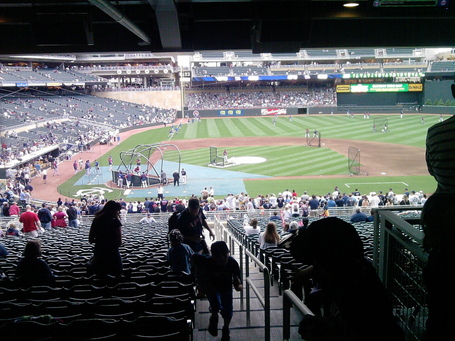 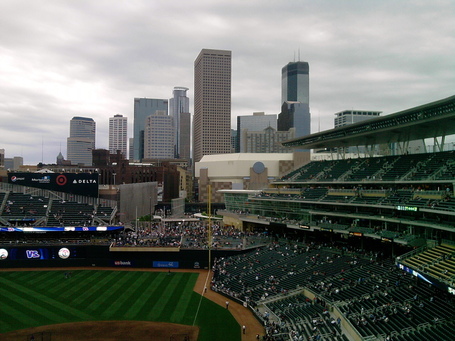 I've missed that skyline.  It's still one of the best out there, and when seen from Target Field it's even better. 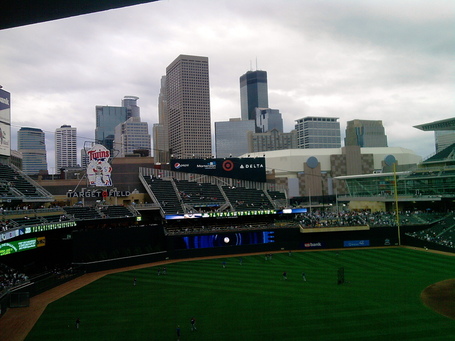 One more for the road? 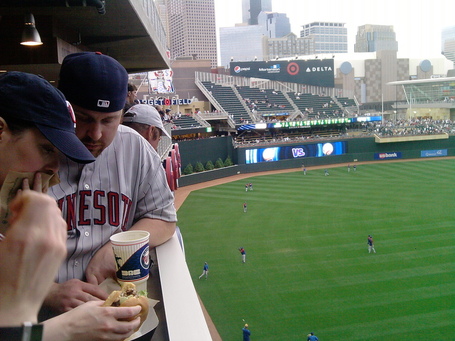 THAT BURGER HAD RIB MEAT IN IT. 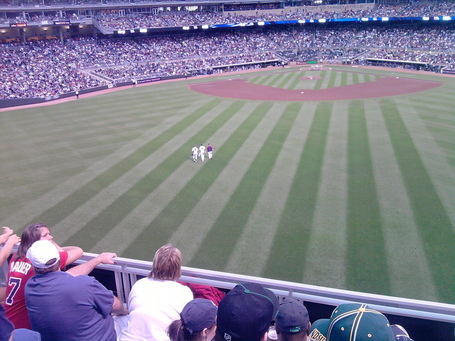 From our seats in center field, directly under Minnie and Paulie.  That's Joe Mauer, Scott Baker and Rick Anderson walking to the Twins dugout. 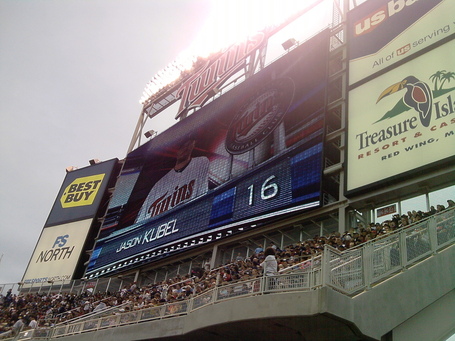 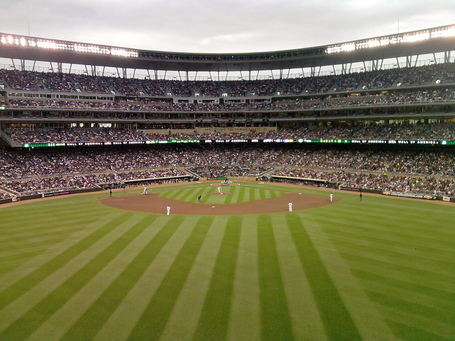 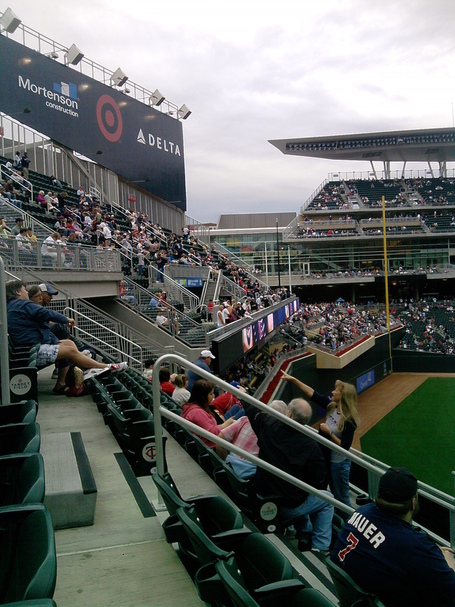 Our view to right field... 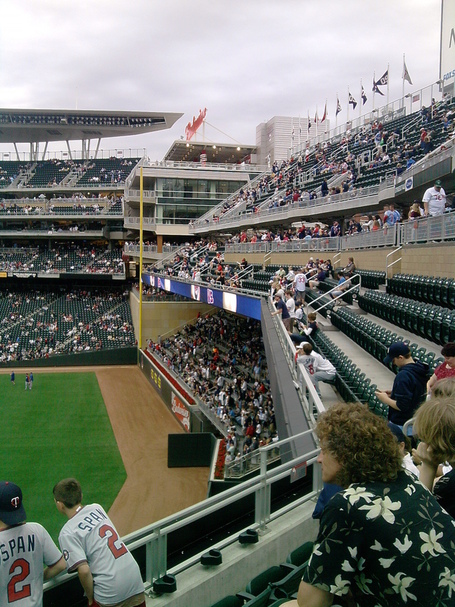 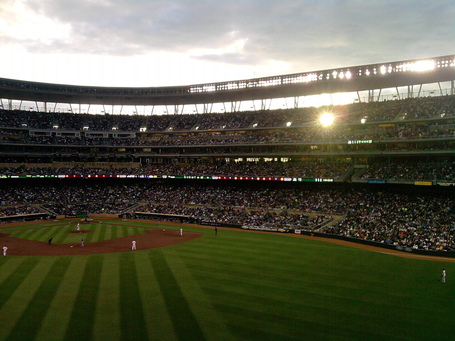 After the rain.  The sun is setting, coming through one of the exits in the upper deck behind the third base line. 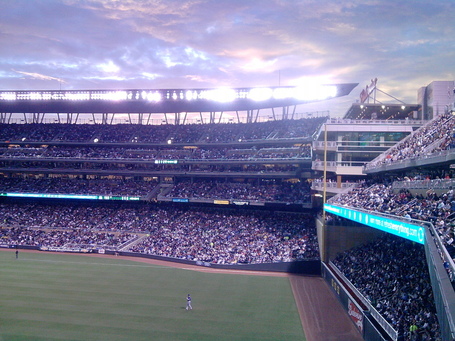 Dusk under a cotton candy sky... 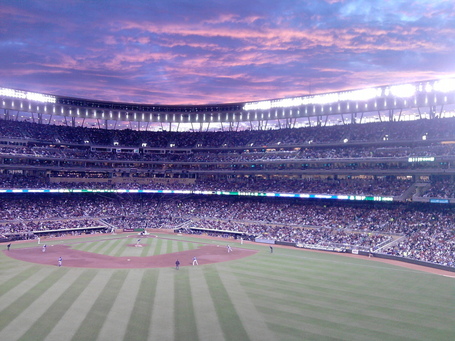 It turned into an incredibly beautiful night after the rain stopped.  A beautiful, Minnesota summer night, a great sunset in a stunning new ballpark...and the Twins were winning.  It's hard to get much better than that. 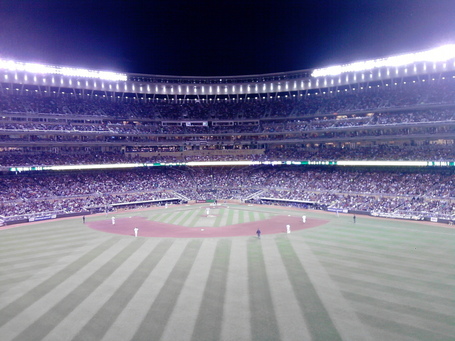 The boomerang is one of Target Field's best attributes when it's lit up. 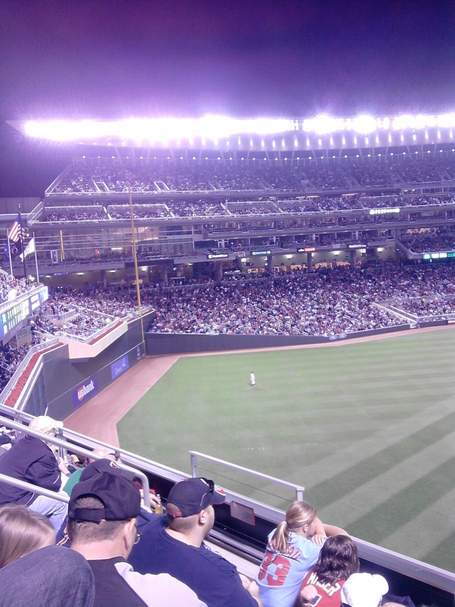 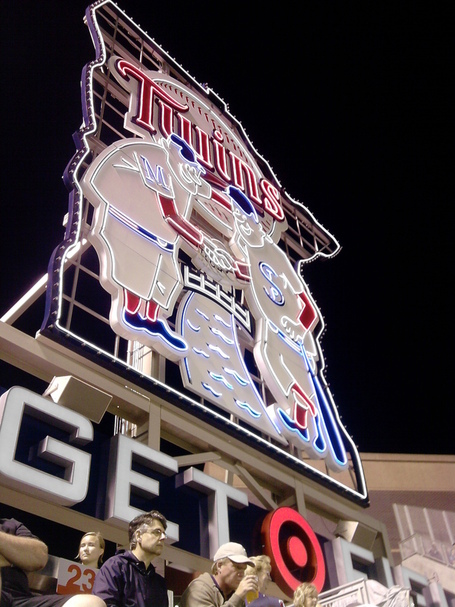 Twins fans look on as we wait to see what will happen between Denard Span and Orlando Hudson.  In case anyone's forgotten, this was the night of the collision that eventually sent Hudson to the disabled list.  Span probably felt like he wanted to go on the DL too, since Hudson's glove hit him square in the balls. 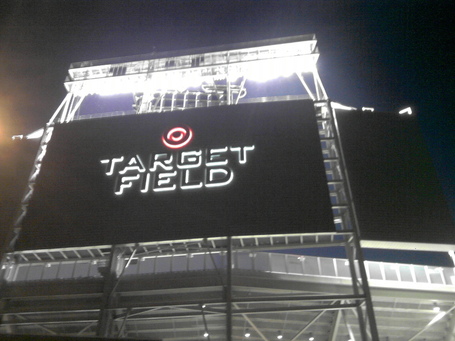 A fond farewell...I shall return...