Please tell me you did NOT give up on watching this game.

For real.  Because if you did, you missed one of the greatest experiences of baseball:  your team overcoming a terrible start and massive deficit in the late innings to comeback and steal the win.  Because that's exactly what happened today.

Kevin Slowey was hammered early.  After being spotted a three-run lead thanks to a few big hits, including a two-run single by Justin Morneau and an RBI double by Delmon Young, Slowey proceeded to unravel before our eyes.  He limped through the first inning and was tagged for three runs, escaping the frame with a tie ballgame.  But he wouldn't finish the second.

Ryan Howard's 14th home run of the season, and his third of the series, chased Slowey with two outs in the second inning.  Slowey had allowed another four runs in the second inning, and by the end of the third the Twins were trailing 8-3.  A game that had started out so promising in the top half of the first had turned into a nightmare for the bullpen, who were facing a second long game in a row.

Newly arrived Jeff Manship did his job admirably, getting the Twins through the seventh inning by allowing one walk and two hits (one of which was a solo home run).  Forgetting the outcome of the game it was a huge performance for a bullpen that simply wasn't in a position to peicemeal together a game from the second inning.

After Morneau and Jayson Werth traded solo home runs in the sixth and seventh, a scoreless eighth led to what can only be described as an inning of destiny, where the Twins trailed 9-4.

Young kicked it off with another base hit before Jim Thome came in to pinch hit for Daniel Valencia.  Thome worked a full count from Jose Contreras, then kicked off what would be a monumental comeback by blasting his sixth home run of the year into the Minnesota bullpen in center field.  Drew Butera, who was warming up relief pitchers in the 'pen, caught Thome's bomb; the 570th of big Jimmer's career.  The gap was now 9-6, with no outs.

Thome's home run moves him into sole possession of 11th place on the all-time list, one ahead of juicer Rafael Palmeiro.  Next up on the list is our own Harmon Killebrew, at 573.

Nick Punto reached base four times today and he followed Thome's blast with a single, advancing to second on defensive indifference before Jason Kubel popped up for the first out of the ninth.  Punto would move up to third on a wild pitch before scoring on a single by Denard Span.  9-7, one away.

Orlando Hudson struck out, but Span stole second for his 14th steal of the season, setting the stage for the slumping Joe Mauer.  With first base open the Phillies and Brad Lidge went after Mauer, whose average was down to .302 after going 0-for-4.

Lidge came inside on Mauer, and Mauer made him pay, sending Lidge's second slider to the right field side of center for his third home run of the season.  As the Twins fans in Philly went nuts in a suddenly silent ballpark, Joe rounded the bases all business.  The Minnesota bench was electrified, but Mauer didn't even crack a smile.

Matt Guerrier pitched the bottom of the ninth, and struck out the side (Victorino, Howard, Werth) to complete his second scoreless inning of work.

But remember Drew Butera?  The same Butera who had caught Thome's 570's homerun?  The same Butera who had picked up six hits in 42 plate appearances?  He knocked Chad Durbin's third fastball over the fence.  It was glorious.  Sadly, on an infield hit by Span later in the inning, Punto tried scoring from second base.  Chase Utley made a diving stop to keep the ball from rolling into the outfield, and then made a great throw home to get him.  I'm not sure who's to blame here--Punto or Scott Ullger--but this was a massive screwup that ended the inning.  Instead of the bases loaded for Hudson with two away, the Twins took a one-run lead into the bottom of the tenth, where Ross Gload hit a two-out homer to tied the game back up at ten.

Thankfully, in the top of the 11th, the Twins would put the finishing touches on a game that looked over by the third inning.  Mauer walked, and with the pitcher's spot due up after Morneau the Phillies wisely walked the big Canadian as well.  Then Ron Gardenhire and Charlie Manuel traded stupid moves.

With one out, instead of giving Rauch the "take all the way" sign to stay out of the double play, the Twins told him to bunt.  Chancing a pop-up, or even worse a terrible bunt that could have given Philly a chance to get Mauer out at third, Rauch was even bunting on 0-2...but he laid it down, and did the job he was told to do.  Gardenhire essentially took the bat out of the hands of his hottest hitter, Delmon Young, by opening up first base.

But then Manuel out-did Gardy's terrible call by making an even worse one:  pitching to Delmon, with the light-hitting Matt Tolbert on deck.  Young made the Phillies pay by delivering his third hit of the game (raising his average to .307), and plating Mauer.  And just to show that the baseball gods are vengeful gods, Tolbert proceeded to double down the left field line.  Two more runs scored, and Jon Rauch picked up the win with a scoreless bottom of the eleventh.

This was an incredible game.  Everyone has been on either side of an outcome like this, and it's not like the Phillies are a bad team.  We all know they're not.  But this one went our way, and I'll take it.  After the pounding Philly gave us yesterday, this pounding is just a bit easier to take.  I'll see you tomorrow. 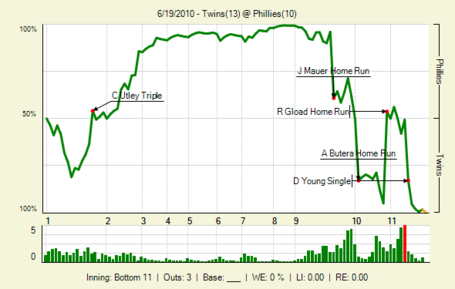