Target Field is beginning to look like the Metrodome to the Chicago White Sox. Last time we saw the Sox in Minnesota, they were walking off the field after an inexplicable Alex Rios throwing error capped off a four run rally in the ninth. Tonight, in a playoff atmosphere tonight at Target Field, the White Sox walked off again, this time the result of a long Jim Thome two run home run in the bottom of the 10th against the filthy Matt Thornton. Think Ozzie Guillen would like to have Thome's bat back in his lineup? Or at least out of the Twins lineup? With the victory, the Twins put themselves four games up in the AL Central, with a solid chance to extend the lead more over the next two games.

Enjoy the rest of your evening. I'll go into a few key moments, plus studs and duds after the jump.

The Twins jumped all over White Sox starter John Danks tonight, scoring four runs in the bottom of the first inning. Scott Baker wasn't particularly sharp in a 1-2-3 first, needing 16 pitches to get through the frame. At this point, a team needs its starter to go out, throw strikes, and get back into the dugout to keep the pressure on Danks. Instead, Baker started Paul Konerko off 2-0, then threw a belt high fastball down the middle of the plate, which Konerko smashed into the bullpen. Then after Carlos Quentin's 10 pitch at bat in which he doubled to center, Baker again grooved a fastball that Mark Kotsay crushed to put the White Sox within a run. So much for the fast start.

In the third inning, the White Sox continued to hit Baker hard. Juan Pierre led off with a walk, then 85 year old Omar Vizquel lined a shot to the gap in right center. But the ball hung just long enough for Jason Kubel to reach over his head, dive and catch the ball falling toward the warning track. The catch easily saved a run with Pierre on base, in fact he was almost doubled off first. Then Delmon Young followed with a nice catch in left center. Sure, outfielders with better range would have made the catches look routine, but they were outs nonetheless, probably saving at least two runs in the frame.

It just wasn't Baker's night. In the fifth inning, Pierre and Alex Rios singled to put runners on first and third with two outs. Baker pitched around Carlos Quentin to load the bases for Mark Kotsay. Gardy had Glen Perkins warming up in the bullpen, and with Kotsay 0-for-forever against left handers, Baker's night was done. Perkins did his job, inducing a grounder into the hole between first and second. Orlando Hudson made a great play, ranging to his left to throw out Kotsay and end the inning.

It's the bottom of the eighth. Perkins, Matt Guerrier and Jesse Crain have combined to put up three scoreless innings and hold the Twins 5-4 lead. It's time for insurance runs. Delmon led off the inning with a grounder through the right side. Then with one out, Danny Valencia smashed a double to left center field, which just barely cleared the fence on one hop for a ground rule double. Go figure, Valencia hits a double to right in the third, with Jim Thome on base it stays in the park. This brought up J.J. Hardy in a sacrifice fly situation. After nearly being decapitated by a Sergio Santos fastball right at his head, Hardy grounded right at second baseman Gordon Beckham, playing in with the runner on third. Delmon was off on contact and Beckham's throw beat him home by ten feet. At least Delmon managed to throw his elbows in A.J. Pierzynski's face as he was tagged out. Then Denard Span lined out to center to end the inning. Not getting the insurance run would hurt, because...

In the top of the ninth, Matt Capps wasted no time blowing the save. On his second pitch, an 0-1 slider that ended up right down main street, Alexei Ramirez homered to left to tie the game. But the White Sox weren't done, following with back to back singles. A sacrifice bunt put runners on second and third, then Capps intentionally walked Rios to load the bases for Konerko. In for a penny, in for a pound, I guess. Konerko fouled off three tough pitches down 1-2, then Capps got a tailor made double play ball to Orlando Hudson. Hardy's throw was low, but Michael Cuddyer picked it out of the dirt to complete the double play. If Cuddyer misses that ball, two runs score and the Twins would be playing catch-up. 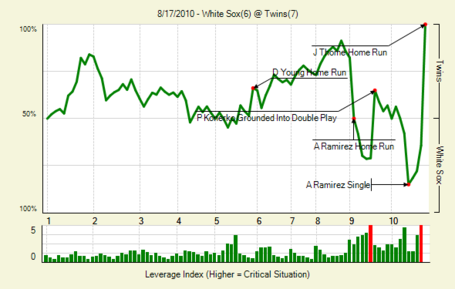 No way I can call anyone a dud tonight. If I had to, Baker and Jon Rauch would be the duds...