Last week, I wrote an article highlighting Jim Thome's remarkable season, going so far as to say he's "packing more power into each of his at bats than any Twins hitter since Harmon Killebrew."

Last night, I had the good fortune of celebrating my 30th birthday at Target Field with my wife and friends, watching one of the best Twins games of the season. Of course, the game was capped off by Jim Thome's two-run, game-winning home run, which put the Twins up by four games with just 43 games left in the season.

That was a hell of a birthday present, Jim. Thank you.

Adam already did a nice job of recapping the game, but I thought I would add a couple more observations:

Orlando Hudson's Home Run: John Danks had every reason to be angry after giving up a homerun to Orlando Hudson in the first. After retiring Denard Span to lead off the inning, Danks got ahead of Hudson 1-2. His next pitch was a 94 mph fastball that sure looked like it sneaked by Hudson for a strike just above the knees (see the green square in the lower left-hand corner).

The pitch was called a ball. The next pitch - an ill-advised change-up left up in the zone - was ripped out of the park. That one run sure made a difference later in the game.

Jason Kubel had an unlikely game: The slow, iron-gloved right fielder not only hit a two-run triple in the first, but also earned a "Web Gem" from ESPN for his diving catch in the third. Of course, Kubel's Web Gem was immediately followed by a nice grab by Delmon in left field. Why did this seem so unlikely? Look at the following graph, which shows the Twins defense as measured by Ultimate Zone Rating: 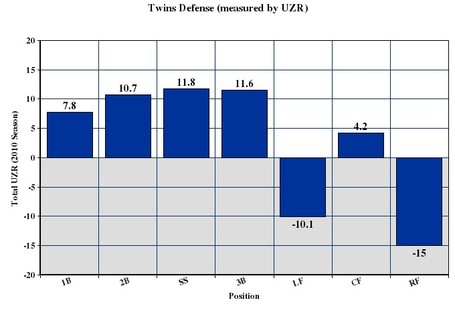 Corner outfield defense has been one of the Twins biggest weaknesses in 2010. So it makes sense that we'd see great back-to-back plays from Kubel and Young in one of the biggest games of the year...right?

Booing AJ Pierzynski still makes no sense: I get it: AJ is a jerk. Nobody likes him. But we traded him. Years ago. For Francisco Liriano and Joe Nathan. Booing him makes no sense to me.

Crain's dominance continues: Rauch had a rough night. Capps had a rough night. Crain's amazing run continues. On May 18, Crain's ERA sat at 7.31. Since then, he's thrown 34.2 innings with a 0.77 ERA. Pop quiz: if you had a one-run lead to protect with the season on the line, which of those three would you like to have on the mound?

The Meaning of One Swing: What did Jim Thome's home run mean for our postseason chances? According to coolstandings.com, our chances of winning the division jumped from 81% to 86% with that one swing. At this point, if the Twins were to just go 22 and 21 the rest of the season, we'd finish 91-71. In order to match that record, the White Sox would have to win 60% of their remaining games. And, as we've seen, their schedule only gets tougher in September.

That was a great win and a great way to celebrate a birthday. We'll remember that one for a long time.