Step 1: Get to him before dark.

Step 3: Shave the end of your bat into a stake (and carry it with you while running the bases, just to be safe).

Step 4: Carry a man-purse/fannypack. Inside: a cross, cutlery made of silver, and a mirror in case you think you've been bitten but need to check (just to be sure).

Step 5: Don't invite him into your dugout.

Step 6: Put up a poster of Sarah-Michelle Gellar in your locker.

Step 7: Remember--if you knock him out of the game he's not actually dead. He's never dead. He will never, ever die.

Step 9: Don't be intimidated when he hangs upside-down in the dugout between innings.

(A few actual Buehrle tendencies after the jump...)

Thanks to Inside Edge for permission to use their images. If you love numbers, seriously consider subscribing. I love it. 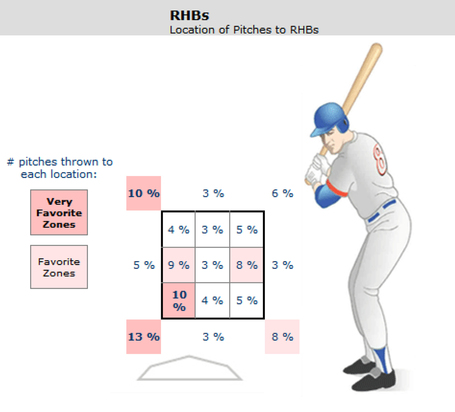 Buehrle, like most pitchers, like to work away to both right-handed and left-handed hitters. His mid-80s fastball(s) and upper-70s changeup make up most of his choices here, with 84% of his pitches being one of these two options. The awkwardly-effective fastball is used about 60% of the time to both right and left-handed batters, but against righties he'll toss that slow changeup 25% of the time.

His breaking balls account for just 16% of pitches in this split. While he'll throw them back-to-back on occasion, in most plate appearances hitters can let these go by and wait for something a bit easier to get hold of. 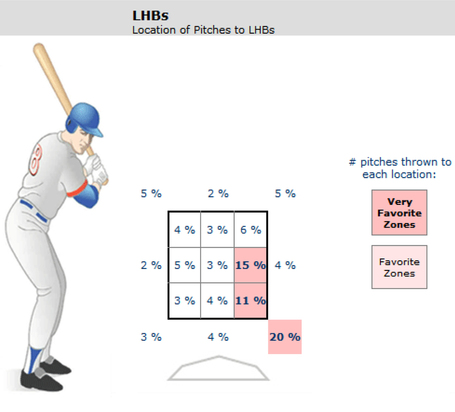 Buehrle is an effective pitcher no matter which side he's pitching to, but lefties have been slugging significantly higher (.467 versus .396). This seems odd to me, since traditional baseball knowledge insists opposite-handed hitters see the ball better.

Against lefties, Buehrle again leads with his fastball by throwing it on about 60% of his selections. But he also stops throwing the changeup almost entirely, going with his breaking balls about 33% of the time. As you can see he loves pitching down and away, which works well considering how his slider and fastball move.

It seems like Buehrle is the type of pitcher who has about nine different pitches to choose from, and when he's on (see: when he throws against the Twins) he'll get you to swing at any of them whether they're strikes or not. Indeed, in spite of a rather pedestrian 5.8 swinging strike percentage, he will get hitters to chase about 33% of pitches outside the strike zone. Most of the time that's going to lead to some pretty sad contact.

Early in counts he'll go fastball--no surprises there. When he's ahead and in two-strike counts you can bet he'll throw anything (particularly changeups to right-handers and breaking balls to lefties); but when he's behind you'll see his curveball just on this side of never. 2-0, 3-0, 3-1: you won't see a curveball.

Buehrle is tough. Part of me likes it that way, because it means a more satisfying victory in those games where the Twins pull out a win. Hopefully some of this information makes watching tonight's game a little more fun for some of you. Hell, place a bet with your friends or try to impress a girl....and then let me know if it works.