MINNEAPOLIS, MINNESOTA - The internet was abuzz with rumors - the Dodgers had placed Manny Ramirez on waivers. Everyone knew it was a foregone conclusion that Manny would wind up with an AL Central playoff contender. But no one knew it would be the Minnesota Twins.

"With Justin [Morneau] still injured, we felt our lineup could really use an impact bat," said General Manager Bill Smith, appearing at an impromptu press conference. "Plus, we felt we needed someone who only speaks in lowercase to compliment Jim Thome's all-caps."

Unfortunately, Smith refused to answer any questions. Instead, he donned a conductor's hat and abruptly left the room, informing the press that "my model railroad won't build itself!"

As if trading for Manny wasn't surprising enough, the Twins shocked everyone in the world but one person by penciling Manny in to play shortstop. "J.J. [Hardy]'s been battling a wrist injury, so plugging Manny in at SS just seemed like a good choice," explained Twins Manager Ron Gardenhire. "We could have played Manny at DH, but we have some other ideas for DH..." Gardy hinted. 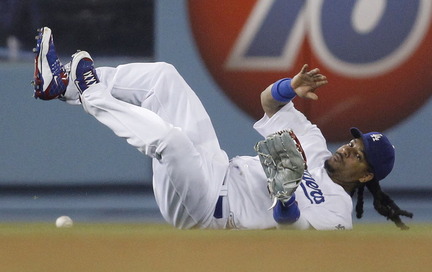 Ramirez Not the Only Player to Switch Positions

Gardenhire also announced that the Twins are moving starting pitcher Carl Pavano to the designated hitter role. The Twins are impressed with Pavano's .500/.500/.500 slash line for the 2010 season. "Some say he's only a singles hitter with no pop to his bat," commented Gardy, "but how many other teams have a DH hitting .500? Not one team. Not the White Sox, that's for sure."

When asked how he felt about switching positions, Pavano made no comment, but sources in the Twins clubhouse tell us that he "looked badass," reportedly because of his mustache.

The Twins made two other moves besides switching Ramirez to short and Pavano to designated hitter. Due to Denard Span's much-whined-about slump, the Twins felt it was time for a change in center field. "Span used to fill the role of a lefty who takes a lot of pitches and gets on base," Gardy told reporters, "so his natural replacement was Jim Thome."

Despite not being asked for his thoughts, Jim Thome spontaneously shouted, "JIM JAM MASHES TATERS AND CATCHES ROPES THAT ARE FROZEN FOR TWINNED FANS IN THE FIELDING CENTER!"

The final lineup move was obvious to anyone who really knows the Twins. After moving Carl Pavano to DH, the Twins needed a fifth pitcher for the rotation. Smith and Gardenhire were stymied by the lack of an obvious choice for the position. But then one player slouched his way to the front of the pack...

"I wasn't getting enough hammock time playing almost every day," yawned former catcher Joe Mauer. "Then it hit me: 'hey, a starting pitcher only has to play once every five days!'" We asked Mauer if he was looking forward to pitching, but Mauer only waved goodbye. "It's time to get ready for my first start next week!" he told us, ducking into the clubhouse. We followed Mauer, but he was already fast asleep by the time we caught up with him, curled up in a blanket knitted entirely out of $100 bills.

Not Everyone is Excited About the New Twins Lineup

Despite the... uniqueness... of the new Twins lineup, not everyone was happy about it. "(bleep) the Twins!" White Sox Manager Ozzie Guillen thoughtfully stated. "And (bleep) that (bleeping) (bleep) Manny (bleeping) Ramirez! (Bleep!)" We also asked members of the White Sox blog South Side Sox for comment, but most of them were too far gone into drunken stupors to reply. The few who did respond described unprintable sex acts involving Nick Punto, Jim Thome and Joe West.

Star Tribune columnist Jim Souhan was also critical of the Ramirez acquisition. "We all know the Twins are going to tuck their tails between their legs and run away like dogs as soon as they face the Yankees, so why bother?" whined Souhan, with his characteristic "wit." Souhan reasoned that after losing three games in a row to Texas, he knew the Twins would be swept by the Yankees in the playoffs. "But you could always ask me again next week. If it's a good week for the team, I'll think about writing something more positive," said Souhan, who has penned surprisingly few cringe-inducing analogies in recent weeks.

However, the most savage attacks on the new Twins lineup came from the sabermetric community. "Thome in center? Manny at SS? That defense is the thing of nightmares... almost as bad as the Mariners offense!" lamented Dave Cameron of Fangraphs. "We tried measuring their defense using the best metrics we had available. But it didn't work! Their UZR plummeted off the scale!" sobbed Cameron. "You broke UZR! You maniacs! You blew it up!" 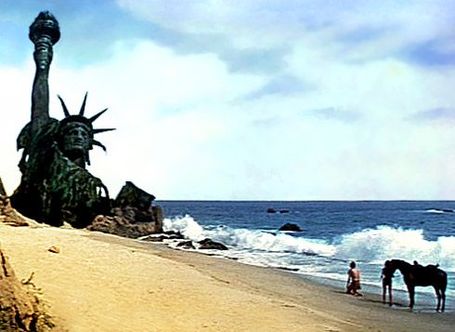 Pictured: the charred remains of Target Field after a particularly bad defensive miscue by Manny Ramirez. Dave Cameron, at right, mourns for the Twins defense that made it all possible.

How many consecutive home runs should we hit?