On November 20, 1986 I was born a diehard Twins fan. Though I don’t remember it at all, photographic evidence has shown I witnessed the Twins win their first championship. At a young age seeing this made my love for the Twins even stronger. The Twins have always shown everything that is great about baseball. They swing for the fence, chase down every foul ball and grind out every win... endless amounts of grit. They allow the likes of Mike Redmond, Hank Blanco, Matty LeCroy, and Jim Jam Tater Salad round second and slide into third (when all four could easily be thrown out at first by Jay Buhner in right field, at any time in their career). They’ve embraced the Lew Fords of the world, they remind us that walks will haunt like the ghost of Christmas Past, and they are not afraid to throw out the hardest swinging outfield in baseball (the first soul patrol). The voice of Darth Vader once said that one thing will remain constant, "Baseball, Ray," and with the Twins we can all depend on a team that hustles, plays sound defense, and can grow some damn good facial hair.

Sure my lifetime love for the Twins may not seem long being only 23 years old, but it is a storied one; one that never has never included the words, "Tony Majewski, Minnesota resident." I have been a Florida resident my entire life, you may ask, "but Tony, why not the Braves? Why not the Marlins? Why not the Rays?!" Well, they have all had their success during my lifetime, they just weren’t the Twins. Sure I followed the Braves during the late 90’s while the Twins were, well, the late 90’s Twins. I watched the low budget Marlins beat the hated Yankees, and I respected them for it, but they still weren’t my Twins. My mother was born in Minnesota, and grew up in St Anthony Village; because of this fact, and regardless of my Miami Beach birthplace, I was baptized a Minnesotan (Holy Cross Catholic Church, Minneapolis). My mother also worked for what would later become Northwest Airlines, which allowed us to fly for very cheap as a family… Summers in Minnesota became a staple of my life … Hey, that’s baseball season! I would attend as many games as possible while up there, even becoming season ticket holders (1,298 miles from front door to the Metrodome), we definitely went to as many as we could. I worshipped Kirby Puckett, Scott Erickson, and Frank Viola (who coached my little sister’s little league team, very cool). As I grew up I came to realize how amazing the 1987 and 1991 Twins World Series wins were as I became more familiar with the game of baseball. With the birth of Pavstache, came of the birth of my most recent mustache. As the Twins season goes along, so does my life. There is my daily life, and then there are the 2-3 hours that the Twins are playing. I owe a lot to my older cousins who helped ingrain the die hard Twins lifestyle into mine, who took me to games when I was younger, and I could always count on to talk Twins with. My cousin Matt was my go to Twins Wingman growing up, and still is today. We'll talk Twins on a weekly basis and go to as many games as possible while I'm in town. The Twins have been a cornerstone for many friendships in my lifetime, and I can always count on those friends... and the Twins... and Lew Ford stories.

Being a Twins fan in Florida always yields some interesting conversations, usually asking what the TC stands for, being mistaken for a local community college team, or just people confused as to why I’m a Twins fan. My wardrobe is highly influenced by the Twins Pro Shop; a backwards Twins hat is a daily staple for me, to the point where I don’t look normal without one. Going to Ft Myers is always great because of the Twins following there, and Minnesotans on vacation always seem so excited to see Twins fans elsewhere in the country. I make it a point to spread Twins love all over the place, which has included me giving Twins hats to young kids, telling them to never succumb to the evil empire that is the Yankees. My friends are constantly annoyed by my Twins related Facebook posts, but they can deal with it… people need to know! Right?

My memorable moments included sitting front row over the Twins dugout multiple times and cheering for, you guessed it, Tony Batista… Who post game showed his appreciation for our constant cheering for him by coming up to us, saying, "oh you big fans, you wait right there," then disappeared into the dugout and emerged with three game balls that he tossed up to us. I still have that ball and will cherish it forever. During Brewer Trip 2006, I had a great encounter with Juan Rincon, which allowed me to circumvent the overpriced Miller Park sunflower seeds as Juan tossed me a bag from the bullpen, we are now best friends forever 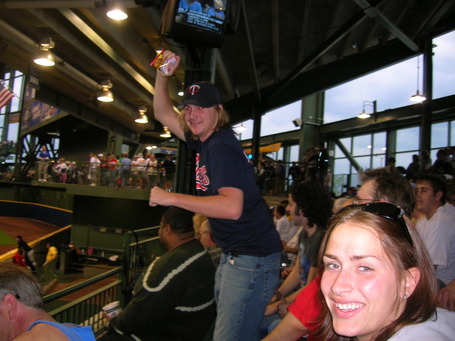 (yes, I realize how awful that long hair looked... I now have a short, business-friendly haircut).

On October 1st, 2006 I witnessed one of the greatest sporting events ever, in my opinion. It wasn’t exactly the game itself but the events leading up to it along with the events following it. On June 12, 2006 the Twins were 12 games back in the AL Central, behind Detroit, Chicago and Cleveland. They were written off by everyone, except the fans. On October 1st, 2006 the Twins beat the White Sox 5-1, this win marked an amazing comeback that tied the Twins with the Tigers for the Division lead. During the Twins game, the Tigers were playing the last place Royals, trying to avoid getting swept, and losing the division. After the Twins won, no one left the stadium, 45,000 people stayed to watch the Tigers game on the Jumbotrons eagerly waiting to see if the Royals could come back and win. Finally, after 45 minutes of anxious score board watching, the Royals beat the Tigers in extra innings to give the Twins the Central Division. The first thing they showed on the jumbotron once they cut away from the Royals win was my cousin and I jumping around like school girls at a Justin Bieber concert (we would be on the jumbotron a second time that day after a Gopher touchdown)... The stadium erupted, the team raced back onto the field to celebrate, creating a giant dog pile in shallow center field. I don’t think I’ve ever seen a group of 40 men look so excited, and I for sure have never witnessed 45,000 people so excited. The Twins made history that day being the first team to ever win the division on the last day of the season after never holding first prior to then. That is a day I still remember like it was yesterday and I will never forget. 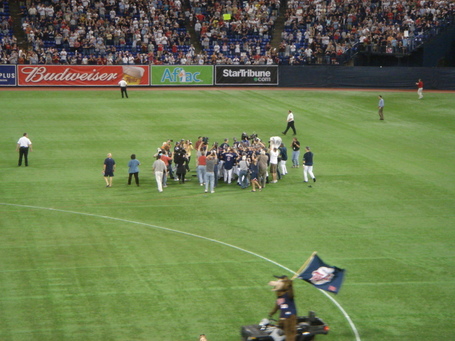 Unfortunately, I have never been able to attend a Twins playoff game thanks to my Florida residency and school, which usually lead to me skipping class to sitting at home to watch us take on the A’s or Yankees. I remember having to leave my house in 2002 as we were taking on the Halos in the ALCS and being heartbroken at Halloween Horror nights at Universal Studios as I learned of our loss. I hate rally monkeys.

Another playoff related story involves a road trip to Ann Arbor, MI with cousins and friends to watch the Marion Barber 'n Company take on the Wolverines in 2004. Tyler Ecker will be hated forever as he caught a go ahead touchdown to lead to a 27-24 Michigan win, I still had never seen the Gophers beat the Wolverines... Later that day the Twins played the Yankees, and my BFF Juan Rincon blew a Santana start and we were eliminated from the playoffs... I was face down in a gutter in Ann Arbor, not drunk, but upset. 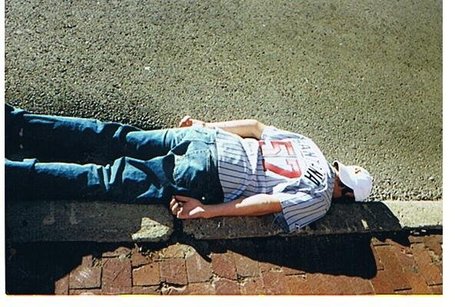 It was better the next year though, because I was there to see the Gophers finally break the 18 year streak and pull out a 23-20 victory... and got my Michigan friend back... 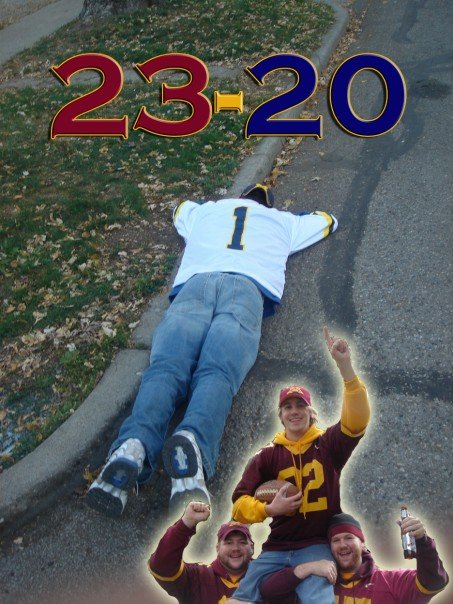 I finally made my way to Target Field this May for the Brewers and Yankees series, I fell in love with it, and I’m lobbying the Twins front office to allow me to build a loft somewhere inside the stadium. Everything about the new stadium is amazing; words cannot express how perfect it is for our Twins and our fans. I spent the majority of my time at the stadium walking around and taking it all in, basically using my season tickets as an admission and not for its value of an actual place to sit and watch the game. Unfortunately I did have to come back home to Florida, where I luckily subscribe to MLB Extra Innings and MLB.tv. I make it a point to watch as many Twins games as humanly possible, which is roughly every game.

I feel that the Twins are the best organization in baseball, that they can do no wrong (for the most part). I hate the White Sox, and made it a point to bring up how great Joe Mauer was when I met AJ Peirzynski after a UF-LSU football game. I eat, breath, sleep Twins Baseball… I get goose bumps whenever I watch any Twins highlight, whether it be a stirring comeback, walk off HR, or World Series moment. 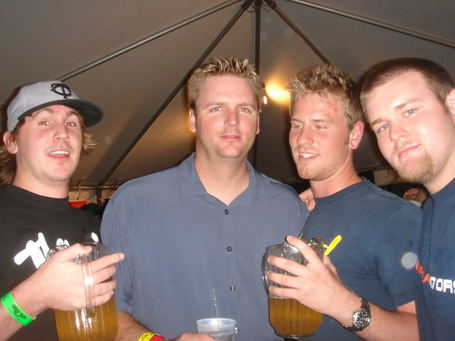 (Photo: AJ Peirzynski commented on my Second City shirt which is located in Chicago, I commented on the Twins moving him to allow Joe Mauer to come up... He ended up being a pretty cool guy when he's not in a White Sox uni)

I recently graduated from FSU, and I’d be a liar if I said I wasn’t looking for a career in Minnesota to get closer to friends, family and the Minnesota Twins. I was outside the Twins clubhouse after the recent series in Tampa, and I felt like I was 12 years old again as players walked around me. I can always count on the Twins to clear my head no matter what could be going on elsewhere in my life, win or lose. The Twins bring out that excitement in me that every little leaguer feels when they play the game they love, something I know will never leave me, even when I’m 80 years old, watching the team I love.