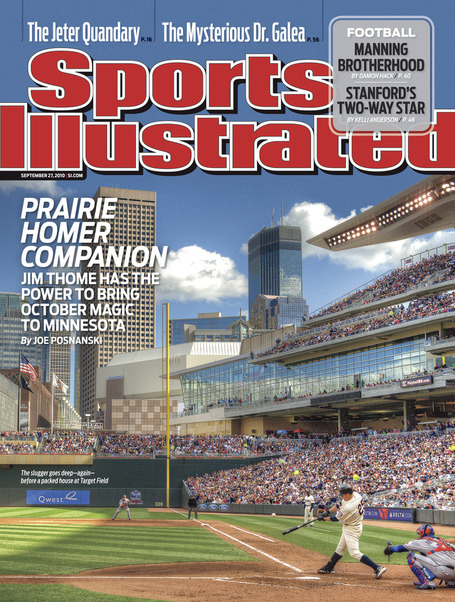 On the cover of this week's Sports Illustrated will be the one and only Jim Thome (see right). It's Thome's first cover. Joe Posnanski, one of our favorite writers (we recently linked to his interview with Kenny Williams as well as his piece on Ron Gardenhire, for example), agreed to answer a few questions for us. CMathewson was our reporter in the field, and asked the questions. I'll drop a couple of quotes from Posnanski's piece on Thome in between sections of the interview. (The Thome article is great, by the way. Check it out, it comes with my highest recommendation.)

Thome told Posnanski that he’s accepted the feast or famine nature of his game even though he hasn’t embraced it: "I really do try hard to be a good teammate. I can’t run very fast, but I try to always run hard. I may strike out a lot, but I try to walk to set up the guys who are hitting after me. The other day I didn’t score from first on a double. I cost my guy an RBI. I felt terrible about that. I told him, ‘Look, I really tried, but I’m old and I’m slow. I hope I can make it up to you in another way.’ "

I have always admired your writing. When did first realize you wanted to be a sports journalist?

Well, not to sound glib because, frankly, I really don't like that word "glib," it doesn't sound AT ALL like what it means ... but I really didn't realize I wanted to be a sports journalist until I kind of was one. That is, I was in college, at this place where I really had no idea what I wanted to do. And through a series of coincidences I ended up covering high school games for the Charlotte Observer. And it was while doing that and various other kinds of writing that I realized this is what I wanted to do.

Which sports writers did you admire before you made a name for yourself and why?

Frank Deford was the big one ... it was reading his collection "The World's Tallest Midget" that I really began to understand just how great a sportswriter could be. There were a lot of writers like that in the early years -- Leigh Montville was probably my favorite when he was columnist at the Boston Globe. I loved Rick Reilly and Bill Nack and Steve Rushin at Sports Illustrated. There were a lot of writers.

What's your opinion of Sid Hartman?

Hey, I see that they're building a stature there in Minneapolis for him. I only have one Sid Hartman story; I was outside Vikings practice, in the parking lot there, and it was cold, and my phone buzzed. I have terrible eyesight, of course, so I pick up the phone and see I have a text. I've got to phone real close to my eyes because of my eyesight, and Sid walks by right then. And he says, "What are you doing, taking a picture?" I kind of laugh and say, "No, I'm looking at a text." And he goes, "You can't take pictures here." And I'm thinking: "Who would take pictures of a concrete parking lot outside Vikings practice?" But he walked off, proud I guess that he had stopped someone from illicitly photographing the ground. I don't know if that says anything about Sid but that's my story.

You write "curiously long posts," which is contrary to every piece of advice you will ever read on how to write for blogs. Yet you keep your audience engaged to read to the end. How do you do this?

Well, I'm sure not everyone would agree with the engaged part. The curiously long posts thing, though, comes directly from my utter in ability to blog. When I started, people (including my wife) told me that the way to blog was to write short, snappy posts with lots of links and photos and I have little doubt that IS the right way to blog. But I just start writing, and I keep on going. I've had more than one person say to me, "I used to read your blog but I had to stop because I don't have the time." I understand that.

"[Thome] told me his charisma’s good," Slowey announces in the dugout as Thome walks to the plate. The high-pitched cheers of 40,000 or so Twins fans echo in his ears.

What does having an SI cover of this magnitude mean for you?

It's awesome, of course. I've had a few covers now, and they're all great. But this one is certainly one of my favorites because I love the photo, I love the subject, and I love that it really feels like an homage to the very first Sports Illustrated cover featuring Eddie Mathews. There's just something kind of historic about it. Very cool. The Stan Musial cover story was so meaningful to me because it gave me a chance to write about a guy who I think should be remembered. Other covers like the Cleveland cover and the Zack Greinke cover were personal for a lot of reasons. And this one, about one of my favorite guys in the world Jim Thome, was just a blast.

You have a special appreciation and respect for the game that is becoming uncommon in sports journalism. How important is this for you?

Well, I love baseball. I love writing about pretty much every sport, but baseball was the game I played as a boy, the game I dreamed about (though I was an insane football fan growing up -- bigger football fan than baseball fan then -- I was too much of a realist to imagine myself playing wide receiver in the NFL). I think baseball lends itself to writing in a way that other team sports do not. I think it's the individual aspects of the game -- it's a team sport, but it's also a one-on-one sport in ways that football, basketball, hockey, soccer and so on are not. Plus, baseball celebrates its history more than most other games. So I would say it's important to me.

My all-time favorite team is the '69 Twins, because they had so much balance. What is yours and why?

Well, my all-time favorite team is the 1977 Cleveland Indians because I was 10 years old and that was what I got growing up in Cleveland. People sometimes ask me if I would be the same kind of writer I am if I had grown up around winning teams -- say around the Yankees or Celtics or Lakers or whatever. I'd have to say: Probably not. I relate to losers, I suppose.

My all-time favorite player is Harmon Killebrew because he's such a gentle man who could do so much violence to a baseball. Yours?

Baseball is the greatest sport because....

Hmm ... tricky because I love other sports as much but in different ways. But I think baseball's combination of team sport and individual sport is unique. And, of course, it's the biggest American sport played in the summer, outdoors (now in Minnesota!), with school out, I just think baseball connects with me in a way that just makes me happy.

If you could change one rule in the rule book, what would you change and why?

Favorite player under 28 and why?

Well, of course it's Joe Mauer. I hope that's why you asked. Got him in just under the gun, doesn't turn 18 until April. I don't think I need to say why. What is there to not like about Joe Mauer? Zack Greinke would probably be my favorite pitcher under 28.

I've always liked Bull Durham. And no matter how corny it is, I like The Natural too.

And then, like Robert Redford in The Natural, he points his bat past Thornton, toward the centerfield bleachers.

How do you rate the Twins against the other teams in the playoffs?

I think the Twins, with Liriano pitching as well as anybody, are in better shape going into the playoffs than I can ever remember. With Liriano, a good bullpen, a meaty middle of the order and a couple of decent starters to go in the other games (Pavano especially) I think they are as good as anybody including the Yankees, who have some real starting pitching issues. But the playoffs are such a crapshoot. Getting home field advantage would be huge -- and potentially somewhat chilly, I suppose.

What's your impression of Target Field?

I have it as $390 million of awesome. Love it. Love the shape of it (It just seems to jump out of the ground, not unlike Superman's Fortress of Solitude) and the way the fans seem right on top of you and, frankly, after all these years of seeing dozens of games in the Metrodome, it's just great to be outside to see the Minnesota sky.

How good would the Twins be if Morneau were healthy?

They're plenty good now. Not sure -- obviously Morneau is a terrific player, he was probably the leading MVP candidate when he went down. But you never know how these things work. With Morneau in the lineup, maybe Thome doesn't get as many at-bats and how great has he been? I don't know ... I like Gardy's take on injuries. Play with the guys you have. Sure, as a Twins fan you would love to have Morneau in the clean-up spot and Nathan closing the ninth inning. But the Twins are really good without them.

How important is having veterans like Pavano and Thome in the clubhouse?

I don't know. I would say it's important -- I heard from a few Twins players about how much Thome means. I think it's great to have those guys in the clubhouse. But at least in Jim's case, I know he gets as much out of being in the clubhouse as they get of him. He loves the atmosphere. The Twins are not unfamiliar with their situation. They've been to the playoffs before, a lot. So it's not like they're looking to Thome or Pavano to show them how to act. But I think it's nice knowing you have professionals who want to blend in and want to help out any way they can.

...and Thome pounds his way around the bases after the first walk-off home run hit in Minnesota’s brand-new Target Field. It’s a big moment: The new stadium shakes with joy, and even at that moment people sense that the divisional race is over.

Does Liriano get any first place votes for the Cy Young?

Probably not. He certainly has pitched about as well as anybody. But there are already so many story lines. Sabathia has 20 wins. Price has 18 wins and a sub-3.00 ERA. Felix leads the league in ERA and strikeouts with a 12-12 record. Liriano has pitched great -- and his home run prevention has been freakishly good -- but that 3.44 ERA isn't in the Top 10 and I suspect that he will just not get a lot of Cy support. We'll see.

Does Danny Valencia get any first-place votes for ROY?

I haven't been following rookie of the year too closely -- it's probably down to Austin Jackson and Neftali Feliz, no? Valencia has been terrific but he doesn't even have 300 at-bats ... I'd say no first place votes.

Our thanks to Joe for his time. For anyone who picks up the SI this week, let us know what you think. You can read more Posnanski stuff by checking out his blog.