Cardinals 3, Rangers 2: A Game of Inches

Share All sharing options for: Cardinals 3, Rangers 2: A Game of Inches

There was no doubt about Mike Napoli’s home run. A huge shot into the gap and over the fence, it was a no-doubter (a term which, unless I’m mistaken, doesn’t actually exist outside of the sporting world) that tied the game at two and reset expectations for the rest of the game. But that was the only sure thing last night.

The second out of the game is a great first example. As a chopper from Elvis Andrus forced Albert Pujols to his right, it was a matter of inches that separated not just Pujols from snagging the ball but from everything that Chris Carpenter did right. Carpenter, moving to the bag in his only option to get the out, caught the throw from Pujols and dove for first base in one motion. It was an amazing play, and part of what made it so great was that there were so many moments where something could have gone wrong. If anything is off on that play, Andrus reaches first, and who knows what happens after that.

All three runs for the Cardinals were scored thanks to a matter of inches. Lance Berkman’s two-run chopper of a double bounced in foul territory in front of the plate before veering fair and over Michael Young’s head at first base. When Allen Craig’s single broke a 2-2 tie in the sixth, Nelson Cruz missed the catch by two inches. If he dives instead, or runs through the ball, he might have made the catch to end the inning. But he slid, and the ball bounced a fraction of a second before he could get there, and it ended up being the run that made the difference in the game.

Finally, the mystery over the phantom toe ball in the top of the ninth inning: with one out, Adrian Beltre appeared to foul a ball off of his left foot which grounded to third base. Of course Daniel Descalso fielded the ball and threw onto first for out number two. Beltre and Ron Washington would argue the call to no avail. And one batter later the game was over.

Replay over the heat vision camera showed that, technically, yes, the ball did bounce off of Beltre’s foot. Barely. The edge of his shoe just barely lights up. Take a look. 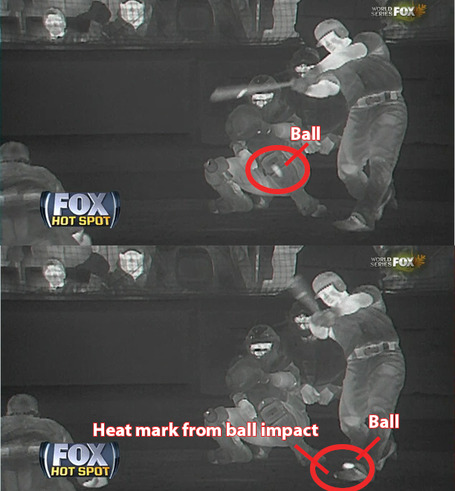 Correctly calling the ball foul may or may not have changed the outcome of the game, and if one of the teams had a more significant lead then it may not have mattered, but in a one run game every out counts. It’s unfortunate the play wasn’t called correctly.

Would the Rangers have mounted a comeback against Jason Motte? Probably not, not the way he’s been throwing. But we’re back to a game of inches. A fraction of an inch one way and the ball obviously hits Beltre’s foot, even to the naked eye, and he can battle for at least one more pitch. A fraction of an inch another way and the ball will either be foul or fair and it’s not a big deal because it’s an easy call.

For me, the bottom line is that it was a good game. And as a lover of baseball, that’s all I want.