The way that Colby Lewis and Jaime Garcia were pitching tonight, it looked like one run would win it. Going into the bottom of the seventh inning both pitchers had strung nothing but zeros across the board, each picking up some big strikeouts and styming their opposition in run scoring opportunities.

So, when Allen Craig, again, comes in with a pinch hit RBI single to give the Cardinals a 1-0 lead in the bottom of the seventh, I thought it was over. Bullpens on both sides are outstanding, and a late lead is as safe as safe can be in a game of baseball.

Naturally, the baseball gods are not content with the status quo. Ever. And certainly not in the world series.

Ian Kinsler and Elvis Andrus were both massive in the top of the ninth. Kinsler dropped in a Texas Leaguer for a single before stealing a base off Jason Motte and Yadier Molina. Molina's relay to second base was an absolute laser, and when Kinsler was called safe I initially thought it was a mistake. But replays showed that Kinsler's hand strapped second base a nanosecond prior to the tag. And then, off the immoveable force of Motte, Andrus came through as well. His single and a misplay on the relay from the outfield put runners on second and third with nobody out.

A sacrifice fly from Josh Hamilton later, the Rangers had tied the game. Hit repeat for the next batter, Michael Young, and suddenly a game that was in the bag had gone askew. And this time, it was the Ranger closer who had the opportunity to close the door. Neftali Feliz did just that.

With the series tied at one, and all of the above fully understood, the real reason the Cardinals lost is because of how the bottom of the seventh ended. Nick Punto was called out for running outside the baselines. Here are two accurate illustrations. 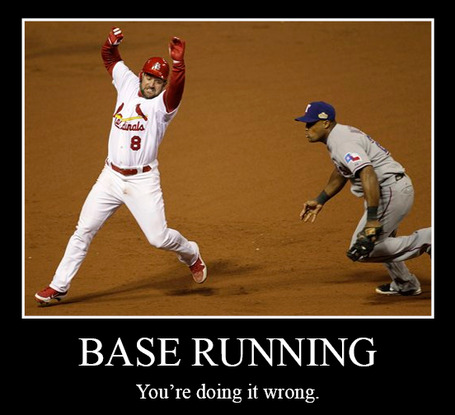