The 2011 edition of the Maple Street Press Twins Annual has been released, and is available for online orders now. All the details are available via TCAnnual.com, where you'll see that John Bonnes has once again put together a deep lineup of writers to summarize, editorialize, theorize, and philosophize about the Twins.

And this year, just for balance, he's included me. He asked for something offbeat. I delivered something offbeat. And after some initial qualms about just what in the blue blazes I'd sent him, and a few questions about whether it was even printable, and - inevitably - a rewrite, I'm part of this year's edition.

My piece is titled "Gardy's Fables: Tales For Our Time From The Manager Of The Year." And as a little preview, I'd like to present the following deleted scenes, without context or explanation. (You'll have to buy the book for that.) 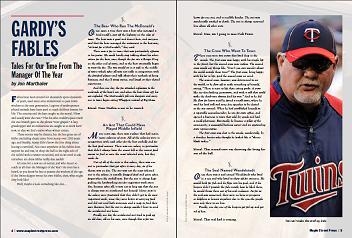 There was once an insurance salesman who sold whole life to a large swath of rural population. One evening, tired from his long drive, he decided to stop in at a tavern in a small town to have a quick drink before going home. Since he did not like cheap beer, he asked for an "import." The locals, not liking the hoity-toity look of this man or his uppity city clothes, asked the salesman to step out back to help them "check on something," where they set upon the salesman and savagely beat him.

The salesman, angry about his injuries, drove back to town and recruited the toughest five insurance salesmen he could find, including one man who aggressively sold annuities to dying seniors and was under investigation by the state insurance commissioner. "My mid-sized sedan can only hold four others, so one of you will have to drive separately," said the salesman. The fifth friend was forced to follow behind in a Prius, which was not as fast getting back to the tavern.

When the man in the Prius arrived, he found that the first five men already out back, getting beat up. He rushed into the fray, but even one more insurance salesman isn't going to make much of a difference against a bunch of townies who think somebody's acting a little too fancy, if you know what they mean, and so all six men ended up in the emergency room.

Moral: Insurance salesmen or light-hitting middle infielders - as far as I'm concerned, one too many is still not enough.

One afternoon, a man who had always enjoyed a quiet life and evenings at the bowling alley decided that it was time for "a little spice." He told his wife, "A man needs more than the simple pleasures. Life isn't about bowling leagues and ginger ale and interesting shows on public television." His wife walked him to the door. "Don't come crying back here when you realize you should have stuck with what you had. Life is trouble enough without you going to look for it," she said. She gave him his coat, and stuck out her tongue and made farting noises as he walked down the driveway, but he refused to turn around.

The man decided that, being newly vivacious, he should go to Las Vegas. He went to the first casino he could find and put down a large sum of money on the roulette table, and he won ten straight wagers, betting on red or black. He tipped the pit boss and the drink lady and eventually was given a free room and free meals, and for a few months, he was a fixture. Casino employees called him "The Mayor," because he was around so often and knew everyone, and he learned to play blackjack and clean up on tourists at the poker tables, and for three months, he was very happy.

One day, though, he was at the tables, and a pudgy woman from Peoria sneezed in the general direction of his drink, which he didn't think much about. But it turned out that the woman from Peoria had the flu, and since the man had been in the casino for weeks straight, he had lost his immunity to all manner of diseases. He holed up in his room for a week to try to get better, but meanwhile he was getting all sorts of calls from the casino, which wasn't giving him free stuff to not gamble, so he tried giving some money to his girlfriend to bet on his behalf, but his girlfriend was a cabaret dancer named Tiffany who took the money and went home to Omaha, and so the man was kicked out of the casino's hotel and had to go to a motel in the bad part of the town. He tried to win his money back by playing the slots in the lobby of a cheap buffet across the street, but of course trying to win at the slots is like trying to get a backyard pool by using your garden hose to fill up the Grand Canyon, and so the man ended up poor and alone. His wife, meanwhile, had met a pleasant man who ran a bookstore and enjoyed ginger ale, and lived happily ever after.

I hope you'll join me for the actual story - along with 126 other (and more useful) pages about the Twins. You can order here, or it'll be on your local newsstand on March 1.