"It is possible to commit no mistakes and still lose." - Captain Jean-Luc Picard to Lieutenant Commander Data, in response to Data's confusion at being beaten by Sirma Kolrami at Strategema.

Francisco Liriano made his mistakes yesterday. Of course he did. But he did a lot of things right, and he had a lot of things happen where a vast majority of the time the situation would play out in his favor. This didn't happen yesterday though, as that fourth inning destroyed his outing and any realistic chance of the Twins coming away with the win.

There was some gnashing of teeth in regards to Ron Gardenhire's comment that he'd like Liriano to "pitch to contact". Pitch to contact is one of those baseball terms that people generally feel they understand yet has never really been qualified. Around the blogosphere and Twitterverse, the general concensus that I got was that people interpreted "pitch to contact" to mean throw more strikes. Specifically, throw more strikes early. The idea was that a more aggressive stretegy would allow Liriano to go deeper into the game, and that his stuff and ability to miss bats would take care of itself.

In some sense, that worked. For a majority of Liriano's afternoon he got results. In fact, the Royals only had a few well-hit balls yesterday, and this is illustrated by Inside Edge's post-game pitcher report card.

But in that fourth inning, the hits just kept on falling.

We'll look at the hits in that fourth inning, so you can see exactly how good most of his pitches were, but first here's your necessary information inning summary: 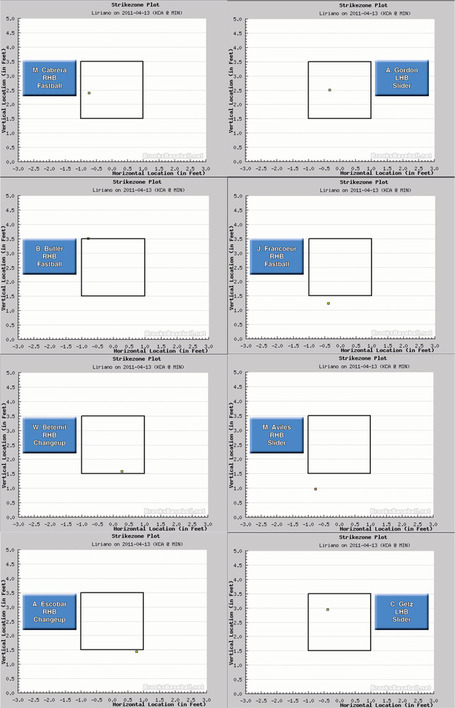 Each location is a result pitch (all singles except Aviles, who somehow got that slider down the line for a double). Five of those pitches are either on the edge of the zone or out of it. Only two would be in areas that I'd call dangerous, and both were sliders left up and tailing away from the two left-handed batters Alex Gordon and Chris Getz.

I'm not trying to let Liriano off the hook here, but at the same time it's really hard to see such terrible results when he really wasn't pitching that badly. Ultimately, sometimes this is just the way it goes. This had to be a nightmare of an inning for Liriano; between weak grounders, flare and bloop singles, and balls either being misplayed or missing a fielder's glove by an inch, the top of the fourth simply was the epitome of Murphy's Law.

And for those Star Trek savvy among you, I know the quote at the top doesn't quite work completely here. Not just because Liriano wasn't actually perfect this inning, but also because in the end, the Strategema rematch isn't won by Data. Data just changes tactics and forces a stalemate. Kolrami forfeits, frustrated to no end because Data isn't actually playing to win, but playing to keep Kolrami from winning.

Liriano won't need to change tactics the next time he pitches against the Royals. He'll just need to hope that the law of averages swing back in his favor.