In a season where runs and wins have been hard to come by, having the most solid part of your team let you down is a disappointment. Carl Pavano was exceptional on Thursday, facing just 29 batters over eight shutout innings. He still picked up his ground ball outs, but for the first time since August he did strike out more than three batters: he struck out seven, his highest total since retiring eight Orioles on strikes on May 8, 2010.

The Twins put their two regulation runs on the board in the sixth. Justin Morneau's leadoff double was followed by a Jim Thome single and a Delmon Young sac fly to put the Twins up 1-0. By the end of the inning James Shields was on the ropes, with Jason Kubel's ground rule double and an intentional walk to Danny Valencia loading the bases with just one out. But only Drew Butera was able to come through with a single to score the second run, as Shields held.

But a pair of doubles off Joe Nathan tied the game in the bottom of the ninth, and Valencia's run-scoring single in the tenth wouldn't be enough for Matt Capps. With out out, Johnny Damon's two-run homer "capped" the game in walk-off fasion.

Forgive the sterile account of the game, but I've found that if I can be as detached as possible then it doesn't hurt so bad. Also, there's more bad news after the jump as we talk about Joe Mauer's trip to the disabled list.

Joe hadn't been himself so far this spring. He's always been a ground ball guy, but that's always been leveraged with plenty of line drives and those weren't coming. Combined with all of the rest days and the late cortisone shot in spring training, you have a lot of circumstantial evidence for what came out last last night: Mauer's legs aren't ready to go.

The initial diagnosis is something called "bilateral leg weakness", and leo3375 has already gone into this at some length. It's definitely worth your time to read.

There are many causes for bilateral leg weakness, check here for what should be a complete list. One of the most common causes, as noted by leo3375, is influenza. Since Mauer currently has the flu it's easy to lean on it as the cause, but we'll still need to wait until we have more information later today. Until then, I'll leave you with a few good questions and answers on the topic, courtesy of freemd.com: 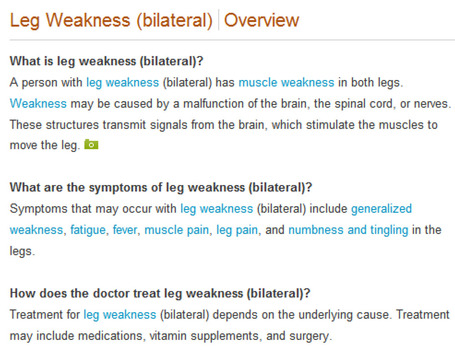