Happy Birthday Bert! Blyleven Signs with Yankees (From the Archives)

Share All sharing options for: Happy Birthday Bert! Blyleven Signs with Yankees (From the Archives) 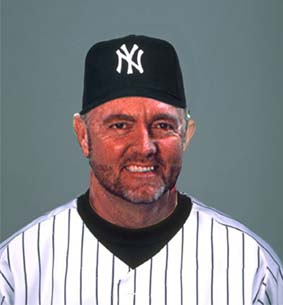 Today is Bert Blyleven's birthday, and he won't let you forget it. In honor of the great Dutchman's day of birth, I'm re-printing something I posted nearly four years ago. Enjoy!

New York, NY (AP): A crowd had gathered around the infield. Standing on the rubber, wearing pinstripes, was a tall right-hander completing the follow through on his delivery. The ball came out of his hand, arced gracefully through the air, and landed in a mit with a resounding pop. To the amusement of some of the surrounding players, the pitcher offered a comment while climbing the mound.

When the call came, a personal gesture from Yankee owner George Steinbrenner, it didn't take Bert long to realize the benefits of the position. "I've really missed the clubhouse shenanigans," Blyleven said with a smirk on his face. "You know how animals will go crazy when you put peanut butter on the roof of their mouth? I did that to Jason Giambi."

There's little doubt that the Yankees needed help in the starting pitcher department. Chien-Ming Wang, Mike Mussina and Carl Pavano have all spent time on the disabled list this spring already. Kei Igawa has been inconsistent, Andy Pettitte turns 35 in June, and Chase Wright, Phil Hughes and Darrell Rasner are all short on experience. Just by walking into Yankee Stadium, Blyleven has become the staff ace.

"Our bullpen has really been overworked, so it's nice to know that Bert can go in there and eat up some innings," said Yankee manager Joe Torre at the press conference announcing Blyleven's signing. "We'll be able to stretch him beyond the 100-pitch count because we know his arm won't blow up." Torre paused before he added, "or so he says."

When asked if the thought of leaving the broadcasting booth gave him pause, Bert answered without hesitation. "No, it didn't. I was ready for a new challenge, and Road Rules wasn't accepting audition tapes. I'll always have fond memories of making obscure quips and of setting Dick's pants on fire, but sometimes they don't tell you that you're live, and you swear. That sucked. Also, apparently it's piranhas, not pirantas. I did not know that."

One of the best pitchers in the history of the game, the Hall of Fame has eluded Blyleven since he became eligible in 1998. He remains a stretch away from gaining the percentage of votes required for election, even though the 53.3% he garnered in 2006's vote was his highest to date. Blyleven doesn't deny that this fact held some sway in his decision to return to the mound.

Apparently being 26th all time in wins, 5th all time in strikeouts, 13th all time in innings pitched and 9th all time in shutouts doesn't merit Hall entry. Additionally, Bert is also one of thirteen men to face 20,000 hitters, and he's thrown 242 complete games with a career ERA of 3.42.

When asked his thoughts on those statistics, Blyleven laughed. "All I'm concerned about is getting out there and acruing some wins. With this offense, I can give up all the homers I want and still get the victory."

Those victories are what the Yankees are willing to pay for. Even though April is already through, and even though Blyleven won't likely make his first start for the Yankees until June, Steinbrenner doled out plenty of cash. Blyleven's deal is worth $27,000,000 over the remainder of the season. "That money was initially earmarked for trades to replentish our farm system, and to feed the homeless, but you know George," said Yankee GM Brian Cashman.

"The guy who wrote me my check, his name was Cashman," said Bert. "As in, 'The Cash Man.' That's pretty funny."

As the interview wound down, Blyleven addressed the press by saying he was going to go cirlce some strikeouts. He rose to leave, paused. "Only 340 days until my birthday," he said a little to close to the microphone, and then he left.

No doubt the Yankees need the Dutchman's help in overcoming an early season deficit in the standings. Although he's 56 years old, there's no doubt that he's going to the place he's the most comfortable: the rubber. From us to you, good luck, Bert Blyleven.