This afternoon we saw a glimpse of what it's like when the Twins are at their best. Nick Blackburn was stellar today, allowing his one run only when a failed double play couldn't end the seventh for him. He allowed five singles and walked just two, and those 12 groundball outs will illustrate just how on his game he was. In control the entire game, he didn't get many clean swinging misses, but the Athletics weren't ever able to get solid wood on the ball either.

For Oakland, it was an ominous start as Tyler Ross lef the game just seven pitches into the contest due to an oblique strain. The A's were forced to piece together their afternoon by burning through a handful of relievers.

The Twins managed a couple of early runs, one in the first off an RBI single from Jason Kubel, and one in the second off a solo home run from...

It was a complete game by the Twins. Not only did they explode for eleven (yes, 11) runs, and not only did they get a great performance from their starting pitcher, but the bullpen did their job and the defense was pretty flashy, too. Rene Rivera threw out Coco Crisp in the bottom of the first as he tried to swipe second base, and Denard Span ended the inning with a diving catch off a full sprint in the left-center field gap. Even Delmon Young made some rangy catches.

The story of this game, though, will inevitably be the offense. Span had a great day, collecting a pair of hits and a walk. Justin Morneau looked like his old real self today, collecting a trio of hits including a two-run homer in the fifth that put the Twins up 4-0, and a team-leading eleventh double in the eighth. Michael Cuddyer collected three hits and an RBI, hiking his average up to .267. Delmon Young picked up a hit and an RBI, Rivera had his homer and a single, Rivera and Alexi Casilla each walked, too. And Danny Valencia, who'd been mired in a bit of a slump, hit the ball hard all afternoon but still started the day 0-for-3. Of course he finally found green grass in his last two at-bats, picking up a double and RBI.

Every starting Twin picked up an RBI today except Span. Every starter had a hit except Casilla. But everyone was on base at least once.

That includes Trevor Plouffe, who (in spite of a few errant throws today) was able to cap the eighth by connecting for a three-run homer. It was a towering shot.

Minnesota has now won three in a row, which is great to see if a tad inexplicable after dropping nine straight just prior.

Trevor Plouffe: Loved the homer, and I want him to be our everyday shortstop, but too many errant throws today
Alexi Casilla: Just doesn't look comfortable batting right handed 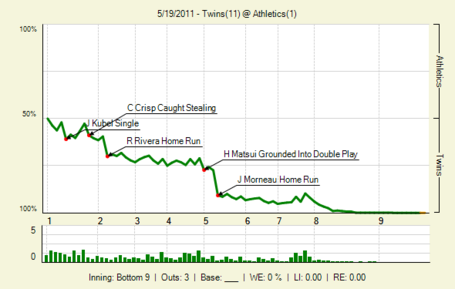