Over the last few days there have been endless commentaries on the situation rift that's developed between the Minnesota Twins and Kevin Slowey.I expressed my frustration the other day, Cmathewson outlined his own earlier this afternoon, and you could have visited any number of Twins blogs this morning to read variations on the theme. But there was one thing that I saw during this afternoon's game that stood out to me.

What's missing in this graphic below? 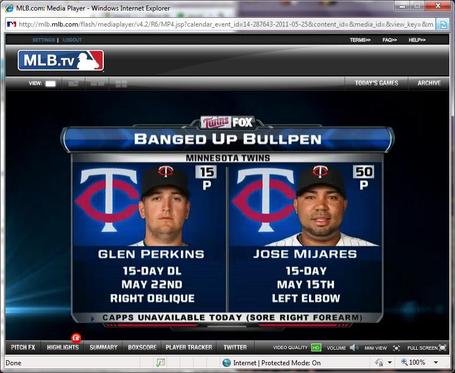 It's a mistake, of course. Yeah, on the television: it's an omission or an oversight or whatever. But it's a mistake on behalf of the Twins as well, because ultimately it's their job to find a satisfactory conclusion to this mess.

With Slowey hitting the DL today, hopefully something can get straightened out in the next couple of weeks that sees him returns to the Twins. He's a good pitcher, and he certainly has more value to the Twins in terms of that potential, than he has value in a possible trade.