Sometimes it's just easier to chalk things like this up to the baseball gods. That's pretty much the point I'm at this season; chalking it all up to something out of the control of our team, because cursed is cursed. This season, if they're not cursed, the Twins sure as hell are snakebitten.

The Minnesota offense exploded for four runs in the fifth inning, giving Nick Blackburn a 5-3 lead. It wouldn't last.

In spite of having allowed five runs and throwing 91 pitches through six, the bullpen is the biggest weakness on this team full of weak links, so Blackburn was run back out for the seventh. He walked Alex Avila on six pitches before Ryan Raburn singled, putting runners at the corners with nobody out. That was the end of Blackburn's afternoon.

After the jump: the good, the bad, and the ugly. Oh, and the end.

I don't know why Gardenhire went right back to Jim Hoey. But I won't pretend to know what happens off the field, and I won't pretend to know how Gardy's mind works in terms of "last chances" or "showing confidence in a pitcher", and I also know that there really aren't any good options for high-leverage situations. Whatever the rationale, Gardy went right back to Jim Hoey. Game tied, runners at the corners, nobody out in the seventh.

Hoey battled with Brandon Inge before finally walking him on a changeup down and in, loading the bases. It looked like another typical Hoey outing.

But then Hoey struck out Austin Jackson. After falling behind 3-1. His 3-1 fastball hit low and away, of course Jackson was taking all the way. Hoey's 3-2 fastball burned the lower edge of the strikezone, inside this time, and again Jackson was looking. Hoey certainly isn't known for his location, but on those two pitches he was exactly what the front office and Gardy wanted him to be; a guy who could actually place his mid-90s fastball and pick up a strikeout once in a while.

Gardy immediately came out and pulled Hoey, replacing him with Phil Dumatrait. Dumatrait worked quickly, striking out Casper Wells on four pitches before getting Brennan Boesch to line out after three straight sliders.

Yes, our bullpen...OUR bullpen...escaped a bases loaded, nobody out situation without allowing a single run. The Twins went to the eighth still tied at five.

Jim Thome worked a walk to lead off the inning. It all went for nought.

Delmon Young was retired on one pitch. Again. At least this time he made good contact. Danny Valencia struck out looking, Rene Rivera swinging. And that was it. The Twins' last best chance of taking this one home wasted in a splurge of incompetence.

Alex Burnett came out for the bottom of the eighth and picked up two quick outs to start the inning. Then this happened:

Of course this play isn't reviewable, and of course Gardenhire was eventually ejected for arguing the call. It was Gardenhire's 56th ejection since he took over as manager in 2002, but this was for all the right reasons. I don't mind seeing Gardy getting tossed. I like someone showing a little passion, and I like seeing that the manager of this star-crossed awful team still cares enough to get his ass off the bench and argue a call that couldn't possibly be reversed anyway.

Here's a graphic I pulled from yesterday's game. 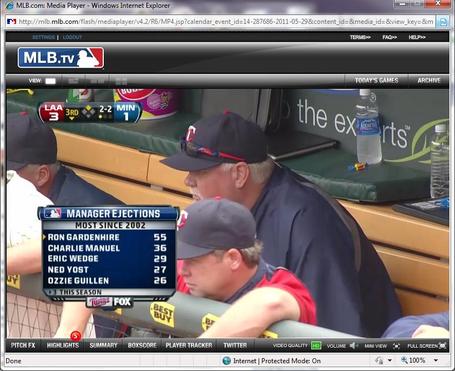 So yeah, you can add one more to that list. If he's not careful he'll double up second place by the end of the year. And, speaking of the end...

Jason Kubel was pulled for pain in his foot, and while X-rays were negative it was Jason Repko who saw the final plate appearance of the game. And, with Kubel now day-to-day, he was Minnesota's final hope today against the Tigers.

Repko flipped a dying flair into shallow left field. I desperately wanted him to reach, because nobody on this planet likes Jose Valverde...not even Detroit Tigers fans. And as the ball continued to fall, and Dick Bremer freaked out and I was shouting for the ball to get down, Don Kelly came out of nowhere. He laid himself out and snagged the ball off the top off the grass for the final out.