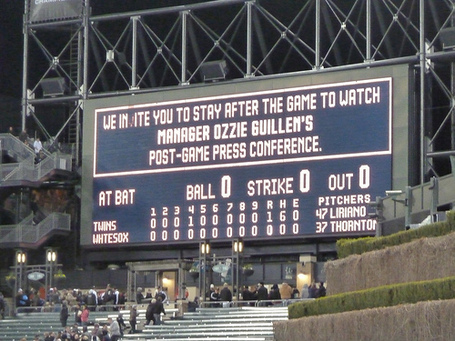 That's the final scoreboard. I still can't believe I saw it in person.

I've been a serious Twins fan for about half of my Minnesota life, so in the grand scheme of lifelong fans, I'm a newbie. Still I've been pretty devoted. I've seem them play at home of course. I've seem them play in KC, St Louis, Cleveland, and even at Wrigley. I'm headed to see them in Phoenix in May, but I'd just never made it to US Cellular. With as many times as I've been to Chicago, it's crazy that it never worked out to catch a Twins at White Sox game.

This time the stars aligned. I had to be in Chicago for a work meeting. The game was a night game. A couple of Sox fans at the office were up for going. I can't say I was ecstatic this afternoon waiting for time to leave for the game. It was the battle for last place. The game time temp was to be about 40 degrees (after being at the snow game last Wednesday no less). They'd lost 6 in a row. It was spitting rain as we arrived.

There are a few more pics posted in Flikr including a few of Frankie warming up in the bullpen. My seats were in the section next to the bullpen, so we had a nice look at him. And thanks to Matt Capps for tossing a Twins fan (me!) a ball while the pitchers were shagging during batting practice.