With the game tied at four, Luke Hughes led off the bottom of the ninth with a double down the left field line. There was some controversy on the call, however. 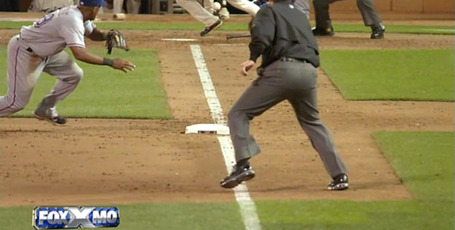 You can see the ball at the very top middle of the screen shot, above what is Luke's left heel. By this point the ball had already bounced off of the chalk line separating fair and foul territory, and at approximately this point the ball is bouncing directly over third base. Adrian Beltre and the Rangers refused to believe the ball was fair, even after the game, but if this ball is directly over third base then I'm compelled to call it a fair ball.

I've emphasized the portion that I think appeals to this play in italics. If the ball is over the base, then it's a fair ball. Even if the first contact with the grass beyond the base is in foul territory. Feel free to correct me, because I'm no Judge Judy and Executioner, but that's how I've interpreted this.

More after the jump.

I won't argue that Rene Rivera was actually out on second base in the fifth inning. Elvis Andrus fielded Matt Tolbert's sharp grounder, tagged Rivera (who had to stop to make sure the ball wasn't caught) and then threw onto first base. A correct call would have place Tolbert on first base with just one out.

As it played out Rivera was incorrectly called safe, and two outs later Michael Cuddyer went boom. Cuddyer's eighth homer of the year put the Twins up 4-1.

You can never assume a series events when entering an alternate timeline, but had Rivera been correctly called out at second base the inning definitely would have played out differently. Maybe Cuddyer still hits a home run, maybe before he gets a chance the Twins are retired on a double play the very next pitch, or maybe Ben Revere scores Tolbert from first on a double. We can't say.

The Twins were granted a couple of favors on Thursday night, and as much as I don't blame Rangers fans for potentially being upset about the outcome of the game as a result, I am taking every single bounce that goes our way right now. All season long, every single bounce has gone against the Twins. We were due a couple of bounces to go our way. Sorry, Texas.

Hughes chopped his double down the left field line to lead off the frame. Mark Lowe struck out pinch hitter Brian Dinkelman before walking Tolbert, at which point the Rangers went to Arthur Rhodes with out one and runners on first and second. Ben Revere would fly out for out number two, but then came Casilla.

After the game Casilla admitted he was looking for a pitch to pull, and that's exactly what he did. Batting right handed Casilla took a 2-1 slider over the lower part of the plate and pulled it over Beltre's head and into the corner for what would have been extra bases. Hughes scored easily to end it.