Share All sharing options for: Introducing the Party Tee & 408 Hoodie! 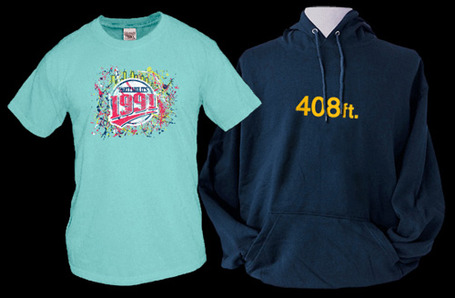 Hey everyone, it's time to unveil our most recent shirt designs!

Since last winter, Trevour and I have been working with community member marshalltheirish on a tee that celebrates the 20th anniversary of the Twins 1991 World Series winning season. We always knew what we wanted, it was just a matter of finding a design that A) represented the team, B) looked like a throw-back design that came to the future from 1991, and C) passed inspection by SB Nation's legal team.

Unfortunately this meant our initial design had to be completely overhauled, but we're thrilled with the result! Our first design is called the Party Tee. Designed in bright summer colors that are ready for any bash, the tee features retro 80s/90s paint splatters with a modern feel. 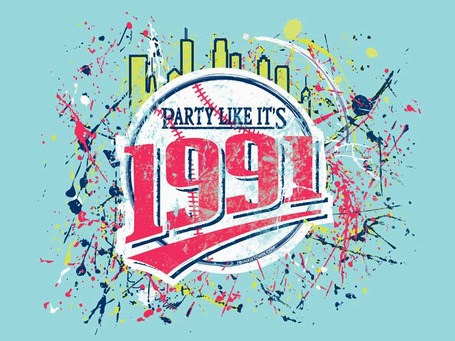 Here's a quick note from Marshall:

"Hey TT members! Before the season began, I came up with this idea as both a consummate Minnesota reference and a celebration of the 20th anniversary of the greatest team in Twins history (and my favorite single-year team in all of sports history). While this season has hardly been anything like 1991, I still hope you all enjoy this shirt, especially with the team reunion in August (which I'll be attending!). Rock it like Brian Harper rocked his mullet 20 years ago! Sincerely, Marshall Garvey (aka MarshalltheIrish)"

As with all of our tees, the pre-order pice is just $10.00 plus shipping. Shirt should be in at the end of June, which means you should be able to don your Party Tee in time for the 4th of July!

Our second design is even more limited than the Party Tee: it's the 408 hoodie! We're producing just 60 of these, as a tribute to the Dome by referencing the 408 foot marker on the center field wall. Love or hate the Dome, it was the home of our Twins for more than a generation of fans and a lot of us have memories of that place that will last forever.

I'll let Trevour add anything else he'd like, as our esteemed artist. Thanks to Trevour for his amazing work, and thanks for Marshall for the inspiration! We'll be back this summer with more player-centric shirts!

Head on over to the Blorch! shop for more details.