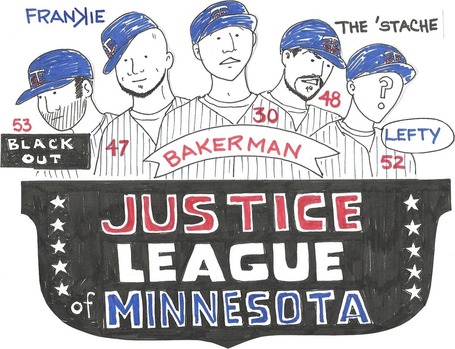 It was no secret that Minnesota baseball was in trouble…deep, deep trouble. The month of April came to an end and the Twins were hunkered down in last place in the American League Central Division, a place no one expected them to be, playing a brand of baseball no one expected them to play. The injuries mounted as did the errors and earned runs. There seemed to be a revolving door installed in the clubhouse and even the broadcasters needed to check their game day sheets to answer the constant question, "Who is batting 7th? What, another Rene? Really? You’re kidding me, right?" They were in dire need of help, but help was nowhere to be found. Actually, what they needed was a hero, or even better, a bunch of heroes, but all the usual suspects in Twins Territory were either on the DL or were in a slump. It was hopeless.

May ended with our boys owning the distinction of being the worst team in baseball and fan loyalty was being sorely tested indeed. Enter one Ben Revere, he of the diminutive stature, but big enthusiasm, running out every ball, diving and leaping for everything hit in his direction and suddenly, there was a tiny spark. A fragile flame began to grow, but was there enough major league fuel to keep it going with no Mauer, no Morneau, no Thome, no Kubel, no Span, and no Nathan? How could the Twins expect to win with such a motley assortment of rookies, minor leaguers and slumping regulars?

Did I say we needed heroes?…

With the month of June, our heroes arrived. Well, actually they were already here but until then they had mostly been stinking royally. Yes, the starting rotation decided to pick up the team! I know. "Shocking" doesn’t begin to describe it.

In Carl Pavano’s place, The ‘Stache appeared on June 2 against Kansas City and pitched a 9 inning complete game for win #100. In June he has started 3 G and given up only 4 ER. Lefty (aka Brian Duensing) pitched in 3 games winning 2 and losing 1 with 5 ER, but still no one remembers what he looks like off the field. Bakerman (Scott Baker) learned how to get outs without taking 8-10 pitches each batter and started going deeper into games. June for him is 4 games, 3 W, 1 L and 8 ER (though 4 of those were in the loss). Remember Nick Blackburn? He’s had 3 games, with 2 W and one was a glorious 8 inning shutout against the White Sox. Can you say, "Black Out?" Then there’s Frankie Liriano, with 3 games, 1 W 1 L (no ER) and 7 more no-hit innings for the man. The bullpen pitchers spend their free time devising strange pre-game rituals in order to get some attention, but no one is fooled. Even Gardy, whose very purpose in life seemed to be deciding when to pull the starting pitcher for a reliever, got the message.

Now that Mister Mauer and Nishioka are back and Thome coming soon, maybe we will see some more offense, because we know the 5 starters probably can’t keep this up. Nonetheless, it sure is fun being a Twins fan once again.

And fun to have heroes to cheer for, too. Up, up and away!