Chart of the Day: Catcher Preview

Share All sharing options for: Chart of the Day: Catcher Preview 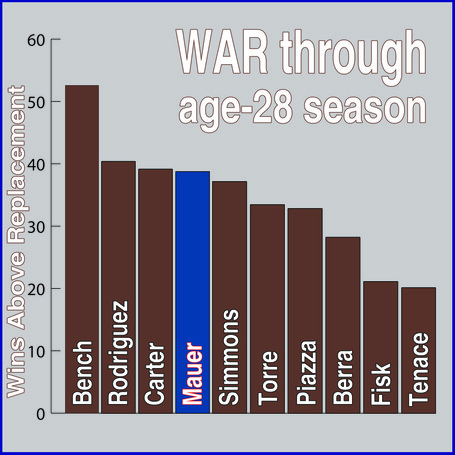 A couple days ago we had a big conversation regarding Joe Mauer, because of what I deemed to be an innocuous comment in my game recap. Oh, I was wrong. More than 230 comments later, it's still my favorite discussion of the last few weeks.

There are certain things you can talk about when speaking of the drawbacks concerning Mauer. But saying he's a singles hitter, as if it's a bad thing, is neither here nor there. It got me thinking: where exactly does Mauer rate? Not just in terms of with the Twins, but in terms of some of the best catchers of all time.

So, I came up with some guidelines. All catchers much be post-1940, because that was an integral era in the game's history when how the sport was played really began to change. I found a list of what I consider to be the nine best catchers of the post-World War II era, according to Wins Above Replacement, and began analyzing Mauer's performance.

What you see above is a preview of this analysis. The full article will be much more in-depth, including the task of how good Joe is with extra base hits (because, y'know "he's just a singles hitter") and other values, but for now, this is just food for thought. Enjoy!