Michael Cuddyer's tremendous play in June has all but erased his dismal start to the season. After hitting a combined 262/322/372 in April and May, Cuddyer has destroyed opposing pitchers over the past three weeks, hitting 333/403/683 and raising his season OPS to a respectable .794.

Judging solely by OPS, Cuddyer's 2011 season looks right at home with the rest of his career: 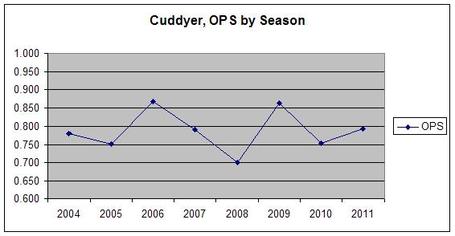 Ignoring the dip in 2008 - during which he played just 71 games, posting a .699 OPS battling through multiple, painful finger injuries - Cuddyer's career has roughly fit with what we would expect from a normal aging curve. His best seasons came at 27, 28, and 30, and his last two seasons (age 31 and 32) look remarkably similar to the two seasons that immediately preceded his "peak" years (ages 25 and 26).

If we look a little deeper, however, we find a much more interesting pattern developing in Cuddyer's career, a pattern that could have a tremendous impact on his future with the Twins and his role on any Major League ball club. Cuddyer, who has never hit right-handed pitching all that well, has seen his platoon splits swell over the past three seasons.

Read more after the jump:

See the chart below, which shows Cuddyer's wOBA against both right and left-handed pitchers during his seasons as a full-time player:

Now here is a chart that just shows the "split" between's Cuddyer's performance against right-handed and left-handed pitching (simply subtracting his wOBA against RHPs from his wOBA against LHPs): 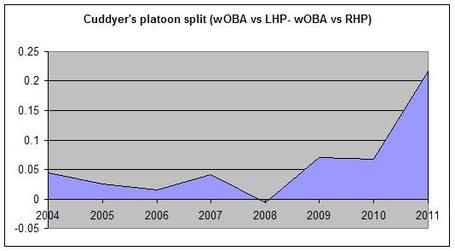 These graphs tell a pretty compelling story. As Cuddyer has aged, he's steadily posted worse numbers against right-handed pitching. At the same time, he's become of the premier lefty-mashers in the game. The gap has almost been ridiculous in 2011: against right-handers, Cuddyer is hitting just 244/290/356. Against lefties? 379/474/712. While we shouldn't expect this size of disparity to continue (Cuddyer's BABIP is a full 100 points higher against left-handers, for one thing), it's clear that Cuddyer's platoon split has grown wider as he's aged.

To help put this in perspective, I put together one additional chart. This show's Cuddyer's rank in wOBA compared to other outfielders that have qualified for the batting title over the past three seasons.

Over the past three seasons, only one other outfielder has done a better job hitting left-handed pitching than Michael Cuddyer: Justin Upton. In fact, going beyond just other outfielders, Cuddyer's .415 wOBA against left-handed pitching over the past three seasons ranks 7th in all of baseball, behind Kevin Youkilis, David Wright, Paul Konerko, Albert Pujols, Mike Napoli, and Upton. Of course, against right-handers he ranks 105th (out of 142 qualifying players), sandwiched between Adam Kennedy, Orlando Hudson, and Alberto Callaspo.

In other words, over the past three seasons Michael Cuddyer has spent one-third of his plate appearances hitting left-handers like Albert Pujols, and the other two-thirds hitting right-handers like Alberto Callaspo. And, as we've seen, the disparity seems to be growing wider.

Michael Cuddyer's future with the Minnesota Twins is clearly up in the air. If the Twins recent resurgence falters and the team finds itself as a seller in July, he will certainly be one of the names Bill Smith is asked about by opposing GMs (in fact, it seems the calls may have already started to come in). Even if the Twins keep Cuddyer through the season, he's due to become a free agent at the end of the season, and looks as though he'll be near the top of a questionable free agent class of outfielders.

Given these looming decisions, it's critical that the Twins recognize what they have in Cuddyer. Without question, he is one of the best hitters in the game against left-handed pitching. However, at 32, it's fair to wonder if his struggles against right-handers mean his days as an everyday corner outfielder may be limited. I mean, if Alberto Callaspo was a corner outfielder with limited range, would Mike Scioscia write his name on the lineup card everyday?