The 500 Home Run Milestone: An Introduction

Share All sharing options for: The 500 Home Run Milestone: An Introduction

Over the next few weeks, as Big Jimmer hopefully continues to march toward 600 home runs (in a Twins uniform, perhaps), I'll chronicle the careers of a select number of players from the 500 home run club. It seems apt, as Thome is eventually headed to the Hall of Fame, and 500 home runs is the benchmark for Hall consideration for sluggers. Through my research I've come up with a bit of an introduction, or maybe a look back and look forward at this one time club for giants.

One of the more interesting subplots of 2011 was supposed to be Jim Thome's chase for 600 home runs. It's an historic benchmark to be certain, and the exclusive nature of this club (which currently holds just seven members) seems to be a step beyond that 500 home run barrier. Because while 500 seems to be the arbitrary benchmark for Hall of Fame consideration for some players (Fred McGriff, for example, would have received much more support if he'd just hit seven more homers in his career, but is likely to never make the Hall, rightly or wrongly, for belting "just" 493), it seems to have lost some of that exclusive mysticism.

The main reason for this is because of the addition of players to this group of amazing hitters over the last decade, as 40% of them are players who have been active in the last ten years. That's worth thinking about.

Reasons for this explosion are varied. Steroids are a big part of the equation, since of those ten players active in the last decade seven have been tied to performance-enhancing drugs in some respect. Interestingly though, whatever enhancers these players took, if it helped them it seems it didn't help them achieve 500 home runs at an earlier age. It only helped some of them achieve the mark, period. 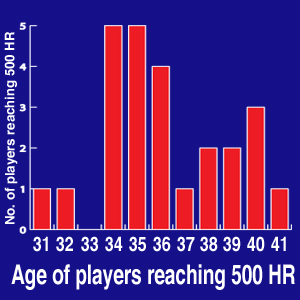 Alex Rodriguez was always going to get there, but he did get there faster than anyone else in the history of the game by topping 500 home runs in his age-31 season. Jimmie Foxx did it in his age 32-season, reaching the mark with his 36th and final home run of 1940. Most other players got there in their mid 30s, between their age-34 and age-36 seasons.

Breaking it down by era didn't change the results or conclusions. The average age of players crossing the 500 home run barrier, no matter which decade, sits firmly in the mid-30s. Rodriguez ('07) and Foxx ('40) show the disparity in eras where the youngest players hit the milestone, and even those guys who did it in their 40s (Ted Williams in '60, Willie McCovey in '78, Eddie Murray in '95) is spread out through the years.

Interestingly, while nine players have passed this statistical benchmark in the 00s, this isn't the first time in baseball history that we've seen club membership expand quickly. 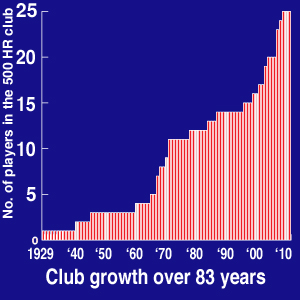 These were players who are synonymous with baseball's golden era (or the end of it), and it was an era that saw many great hitters. It's certainly feasible that every couple generations, a number of great power hitters will rise through the game together and, ultimately, achieve this milestone within spitting distance of each other.

It doesn't appear that 500 home runs has become an easier number to reach, in spite of the last decade, particularly when you look ahead to the next one. Among active players, the only one with more than 400 home runs who is likely to reach the next hundred is Albert Pujols. Chipper Jones, Vladimir Guerrero and Jason Giambi aren't going to get there, and Andruw Jones may as well be 44 instead of 34.

The next youngest players are Adam Dunn (361 homers, 31 years old) and Mark Teixiera (296 homers, 31 years old), and neither one is a sure shot for 500, especially Teixeira. The leading home run hitter for players in their 20s is Miguel Cabrera, who has 262 at age 28. Prince Fielder is way behind him with 212 at age 27. They'll each need to play until their late 30s just to have a shot.

There just aren't any young sluggers in the game who are powerful in the historic sense of the word.

The only players who have hit 500 home runs and are retired who are not in the Hall of Fame are players who crossed this threshhold since 1999, when Mark McGwire became club member number 16. Some of this is because it takes some time before a worthy player receives enough support to merit membership to the Hall, but over the next few seasons we are going to find out how seriously the Hall committee takes the issue of performance-enhancing drugs.

Barry Bonds was always going to hit 500 home runs, but he finished with more home runs than anyone in the history of the game. 762 is an incredible number. A-Rod and Sammy Sosa are both in the 600-home run club, but unlike Ken Griffey Jr. have been tied to the steroid scandal. And if Sosa has a hard time getting in after being in such elite company, how are Gary Sheffield (509), Manny Ramirez (555), Rafael Palmeiro (569), and McGwire (573) going to get in?

Call me crazy, but I don't think Frank Thomas, Griffey, or Thome will have much problem achieving the highest individual honor in the sport.

The baseball world has seen a rush to the membership of the 500 home run club before in its history. But while membership explosion hasn't been unprecedented, the recent spat of barrier breakers have some tarnish on their totals. Over the next decade we are going to find out if this last generation of super sluggers will be the first to hit 500 home runs, and not get into Cooperstown.

Once that happens, the 500 home run barrier loses even more of that aura of greatness. It could potentially lose its power as a measuring stick for Hall of Fame worthiness. And when I look at it like that I have to ask: will 600 become the new 500?